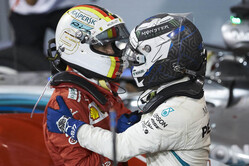 Other than routine maintenance, no changes of significance have been made to the Bahrain International Circuit ahead of this year's race.

In terms of tyres, this weekend Pirelli is providing the C1, C2 and C3 compounds which are at the harder end of the 2019 range.

The track surface at Bahrain is very abrasive, having originally been built using granite from England: one of the reasons why the hardest compounds have been selected.

Track temperatures can fall quite dramatically as the race heads into the evening and this can have an effect on strategy as well, by lengthening the stints.

Bahrain is all about acceleration, braking and traction rather than fast corners, and it is a rear-limited track - making it important to look after the rear tyres.<p>

The late afternoon race and qualifying means that FP2 is the only directly relevant free practice session, so the majority of simulation work is compressed into those 90 minutes.

The next five drivers over the line however, Gasly, Magnussen, Hulkenberg, Alonso and Vandoorne, were all on a two-stop strategy.

The circuit includes four straights and both the ICE and turbocharger will work at full revs for around 61% of the lap. The arid climate can have severe consequences for the ICE as the pressure inside the cylinder rises and knock can be a real problem. Ignition timing is therefore very tightly controlled and checked to prevent issues developing.

The corners of the back section from turns 4 to 8 and 11 to 13 have several heavy braking points. Around 29% of the energy recovered under braking comes from turns 1 and 4, which will allow the MGU-K to keep the battery reserve at high charge. This is very important since the MGU-K will also be required to feed the ICE on those four long straights.

The long straights give a steady stream of exhaust flow to the MGU-H. This is particularly important since fuel consumption over one lap is extremely high due to the frequency of heavy braking and acceleration. Sakhir has in fact the second highest fuel consumption per lap after Montreal.

The straights give plenty of opportunity for the MGU-H to recover energy from the exhaust, but it's crucial for it to convert quickly to the 'motor' function to give good drive out of the slow speed corners. A smooth, neutral PU set up will show up in the lap time.

The braking points at the end of the straights call for particular engine maps. Coming after a long period of wide open throttle, the braking phase is a lot heavier and cylinders are cut for longer. As a result their temperatures drop and getting them firing again correctly is incredibly important.

That said, Vettel has more wins in Bahrain than any other driver. The German has twice won this race with Red Bull, in 2012 and 2013, and also won the two most recent grands prix here, with Ferrari. In terms of odds, SBD lists Vettel as the third favourite driver to win this weekend's race with his odds set at +625 after struggling to finish fourth-place at the Australian Grand Prix.

Ferrari has the most wins of any constructor at this circuit. Alongside Vettel and Fernando Alonso's wins, the Scuderia won with Michael Schumacher in 2004, and then took two victories with Felipe Massa in 2007 and 2008). Their total of six is double that of closest rivals Mercedes.

Robert Kubica returns to Bahrain for the first time since 2010. This circuit is where, in 2008, the Pole scored his first and sole pole position to date, when driving for BMW Sauber.

Kubica isn't the only current driver to have scored his first pole position in Bahrain however, Valtteri Bottas took his first pole here in 2017 with Mercedes.

Two other drivers from the current grid have started from pole position here. Vettel has the most starts from the front of the grid with three (2010 and 2012 with Red Bull and 2018 with Ferrari), while Lewis Hamilton has two Bahrain poles, in 2015 and 2016, both with Mercedes.

Mercedes has more poles than any constructor, with five. Nico Rosberg started from P1 in 2013 and 2014 before Hamilton and Bottas got in on the act with a five-season streak for the Silver Arrows. Ferrari is next on the list with four.

Romain Grosjean scored the first podium finish of his career in Bahrain. Racing for Lotus in 2012, he took third place behind team-mate Raikkonen and race winner Vettel. Since then the French driver has amassed a further nine podiums, including a second visit to the Bahrain rostrum in 2013. His most recent podium finish was for third place at the 2015 Belgian Grand Prix. All were scored with Lotus.

All three of this season's rookies have raced at this circuit before. Alexander Albon competed here in F2 in 2017 and 2018, getting a best result of fourth in last year's feature race, while Lando Norris won that feature race in his sole campaign in F2, and George Russell finished in P5 in that same race on his way to the 2018 F2 title.