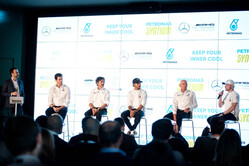 If we assume that last week's tests represented FP1 and FP2, in the coming week we move into FP3 and finally qualifying as the teams make their final preparations for Melbourne and the races that follow.

Though yet to fully unleash the W10, and while delighted with reliability and the initial pace, Valtteri Bottas is concerned at the car's handling in terms of balance.

"We have work to do," he told media at a promotional event in Turin, "but it's a good feeling in the sense that it feels like there is potential.

"We were getting to a much better state at the end of the week," he added, "but some of the handling issues can only be sorted with some upgrades. We're hoping to fix those hopefully soon."

"At the moment we are behind," he added Lewis Hamilton. "So, we don't approach the first race currently at all relaxed, not that we ever do. We still have a lot of work to do.

"This is going to be the hardest year yet," he insisted, "but I feel I have the best group of people behind to climb that mountain together. We are going to face our toughest challenge but I feel like I have the right soldiers behind me."

When asked what he felt was missing, the Briton smiled and replied: "I won't say... I don't want the others to know what we do and don't need."