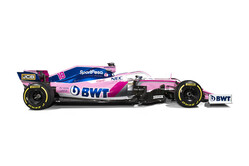 The on-stage presentation at the Canadian International Autoshow showed off a striking evolution of BWT's pink livery adding the blue of new title partner, SportPesa, the global technology and entertainment company.

A new 'point' logo in pink, blue and magenta was also introduced alongside the team's new identity as SportPesa Racing Point F1 Team.

The arrival of SportPesa sees prominent branding on the engine cover as well as on the front and rear wings. Logos of principal sponsor, BWT, are positioned on the sidepods, front and top of chassis, headrest and reverse face of the rear wing. The launch event also introduced new partnerships with household names, JCB, Bombardier, and Hackett, with all brands enjoying branding positions on the car's new livery.

The longstanding partnerships with Claro, Infinitum and Telcel continue as does the NEC relationship with branding on the headrest, nose and wing mirrors. Logos from lubricants brand, Ravenol, appear on the barge boards, while insurance brand, Canada Life, takes up a position on the lower engine cover. The partnership with Acronis continues with logos situated on the rear of the sidepod.

"After months of hard work behind-the-scenes it's incredibly exciting to come to Canada and present our new identity," said Otmar Szafnauer. "The long-term aim is to take this team to the very top of the sport. We are putting the building blocks in place and it's important we take a good step forward in 2019 as we begin this new era. We want to be fighting for podiums on merit and aiming for a strong top four finish in the championship."

"The design and build process for the RP19 has generally been an improvement compared to previous years," added technical boss, Andrew Green, "which is a positive result of the change in team ownership. I look forward to seeing the car on track. We all want to start understanding the various aspects of the car's performance; understanding all the mechanical and aerodynamic improvements of the car, our new power unit and make sure our reliability is sound.

"We are already looking beyond our testing-spec car, actually: we're planning what to bring to the first race, what to bring to round five in Barcelona and what we should be looking at as we develop this package, something we've been unable to do previously. A new set of aero rules means the development slope has become steep again."

Sergio Perez summed up his goals for 2019: "I'm really excited to stay with this team as we begin the new era. We have stability and strong leadership at the top, which is important because it means I can simply focus on the driving and performance. I want us to be the best of the rest once again. I believe in this team and I think we can achieve great things together."

"I can see how much potential we have in this team and there's an incredible buzz in the factory and so much enthusiasm," added Lance Stroll. "I always aim high so I want us to be competitive right from the start. It's way too early to know how we compare to the other teams, but right here today I believe we should be fighting for points in every race. My goal is to get back on the podium in 2019 as well. I've seen what this team achieved in the past and it's a real credit to the people involved. I'm looking forward to making our own history."