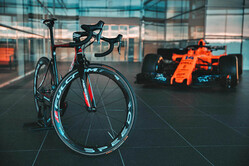 McLaren Group has announced that it is to become a 50 percent joint venture partner in Team Bahrain Merida, the UCI World Tour team with a long-term vision to participate at the top level of the sport.

According to the press release:

The move signals the ambition of the McLaren Group to innovate at the intersection of technology and human endeavour, and reflects the collective vision of its Bahraini ownership to unite its investments in sport and technology through McLaren and Team Bahrain Merida.

McLaren Applied Technologies undertakes challenging projects that naturally fit with McLaren's skills, experience and technical capacity. Competition, racing and the combination of athlete and machine are the lifeblood of McLaren's 50-year-plus history and cycling is one of the rawest examples of all those elements coming together.

Ahead of the 2012 London Olympic Games the company collaborated with Team GB's cycling, rowing, sailing and canoeing teams who reaped the rewards from performance management systems designed by McLaren Applied Technologies.

Team Bahrain Merida comes into the partnership from a position of strength and this venture represents a natural part of the team's growth. The combination of the team's upward trajectory, and McLaren technology, human performance and marketing expertise, will underpin the joint ambition to build an internationally recognised pro-cycling brand through a long-term partnership aim to be the best in professional cycling.

"Racing, technology and human performance are at the heart of everything we do at McLaren," said John Allert, Chief Marketing Officer, McLaren. "Cycling is something we have been involved with in the past and have been looking at entering for some time.

"It is a completely natural fit for our skills and our ambitions and a perfect partnership with Team Bahrain Merida who have the right vision and approach for the future. We will be working tirelessly in the months ahead as we know the world of professional cycling is home to some of the best athletes and competitive teams in the world of sport.

"What Team Bahrain Merida has achieved in less than two years, off a standing start, is hugely impressive. Working together with a team this driven is a very exciting prospect indeed."

"McLaren has been raising the bar for technological innovation and sport performance for decades," added Brent Copeland, General Manager, Bahrain Merida Pro Cycling Team. "The combination of our passion and vision for Team Bahrain Merida to be a winning team, with McLaren's expertise and dedication, is the perfect partnership."

"To be the best in sport you need the right vision, athletes, team and technology," said Duncan Bradley, Health and Human Performance Director, McLaren Applied Technologies, "and I believe we have all of those with the partnership we have entered with Team Bahrain Merida. We will be working side-by-side to ensure an integrated approach and that we get the best out every part of the team."

"Our partnership with McLaren is one that gives me great national pride and excitement for the future of Bahrain cycling," concluded HH Shaikh Nasser Bin Hamad Al Khalifa. "We want to be the best in the world and an example to others of how to compete in this most challenging of elite sports.

"The partnership with McLaren will provide invaluable expertise and experience of getting the best out of machines and athletes and will help to accelerate our team's journey to the pinnacle of professional cycling."