Hamilton takes a tumble on Superbike 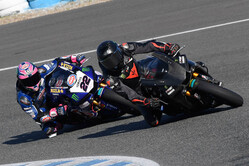 It's understood that Lewis Hamilton had a minor crash while riding his Superbike at Jerez last week.

The 5-time Formula One World Champion took two of the latest additions to his 'toy collection', Yamaha YZF R1 superbikes, prepared by WSB team Pata Yamaha, to Jerez, following his final win of the season in Abu Dhabi.

Whilst lapping the Spanish track with Alex Lowes and Michael van der Mark (pictured), Hamilton crashed his bike at Turn 7, but was able to walk away with only his pride dented.

Wearing a plain black helmet and leathers, the only obvious clue to his identity was the number 44 sported on his bikes.

Earlier in the week the track had been used by both MotoGP and WSB for testing.

A keen bike fan, last year Hamilton spent a couple of days on track with LCR Honda rider Cal Crutchlow in California, the pair both sponsored by energy drink Monster.

Hamilton is an ambassador for MV Agusta, which has produced a number of limited-edition bikes in cooperation with the Briton.

On Sunday evening the Briton tweeted "sick couple of days in Jerez" along with a picture of himself in action.

He subsequently took to Instagram where he posted more pictures along with a brief message declaring his love of two wheels.

"Woke up feeling great today, miss riding the superbike already, he wrote. "FYI, I've always loved two wheels more than four. Always wanted a motorbike since I was a kid, however am super grateful my dad got me a kart. But current new love is out on track on my bike.

"I have the highest regard and respect for those motorbike riders," he added. "It's a much different discipline, however, and requires some of the same basics such as time, patience, fearlessness, focus, agility and risk taking. All of which make a sport exciting.

"And yes, I'd love to race bikes. But these guys are on another level so I think I'll just enjoy riding and testing the limits on track."

In conclusion Hamilton called on nine-time champion Valentino Rossi to invite him to his motocross ranch in Italy.

"@valeyellow46, I need to come to the ranch asap," he wrote.