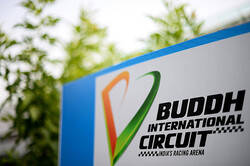 As some sections of the media seem determined to act more and more as PR for the sport under its 'new' ownership, it didn't come as too much of a surprise at the weekend to hear Sky Sports F1 paying tribute to the news that the sport is heading to Vietnam in 2020, even to the point of gushing over the proposed track layout, which, we were told, looks "exciting" and "demanding" and "offers great overtaking possibilities", "high speeds" and "some great racing".

Of course, similar comments were made in anticipation of the events in India and Korea.

Speaking ahead of the Brazil weekend - a race under threat and which could well make way for Vietnam, yet genuinely offers "great overtaking possibilities", "high speeds" and "great racing" as well as being "exciting" and "demanding" - Lewis Hamilton admitted that he was loathe to see the calendar expand to as many as 25 races, hinting that if this were the case he wouldn't be interested.

Speaking amidst the celebrations of Mercedes fifth championship double, the Briton went a little further, suggesting that the sport should be looking at quality as opposed to quantity.

"On the racing side, I don't know how important it is to go to new countries as such," he told reporters.

"If you had the Silverstone Grand Prix and a London Grand Prix, it would be pretty cool," he added; the former under serious threat and set to disappear from the calendar after 2019 and the latter never realistically likely to happen.

"We've got a lot of real racing history in England, Germany, Italy and now in the States it is starting to grow," he continued. "But you only have one event per year in those places. If it was my business, I'd be trying to do more events in those countries.

"I've been to Vietnam before and it is beautiful. I've been to India before to a race which was strange because India was such a poor place yet we had this massive, beautiful grand prix track made in the middle of nowhere. I felt very conflicted when I went to that grand prix.

"We had a grand prix in Turkey and hardly anyone came. Cool track, cool weekend but poor audience."

Unfortunately, though he doesn't mention the wretched term, the Briton appears to agree with Liberty's desire for events in "destination cities".

"If you have the German Grand Prix and you've got a Grand Prix in Berlin, I think connecting to cities where a lot of people are is probably a good thing, not necessarily going to countries where they don't know so much about Formula 1," he said.