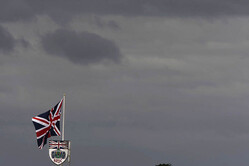 Speaking in the latest Liberty Media Corp earnings conference call, F1 boss Chase Carey was unable to offer any tangible hope to British race fans facing the loss of their Grand Prix after the 2019 event.

As ever, the American appeared to pose more questions than he answered, when asked for an update about the future of the race.

"I think on ongoing negotiations and discussions, we've said in the past this is a sport that seems to like to negotiate in public, and I don't think that's the healthiest way to deal with things as partners," he said. "So, I don't think we want to provide a lot of inside the tent commentary on active discussions.

"We value the Silverstone race," he continued, "but we've got to get to a place that works for us... and those discussions are ongoing.

"There are always other options. It's part of... one of the things we make sure is that we are continuing to develop an array of options. We're in a fortunate place right now that we have more places that want to have races than we can race. That's a good place to be and we'll continue to develop those options, and make sure we are able to make the best decisions both for fans, for racing and for us as a business. All those things matter, and we're actively engaged."

"Clearly, Miami is an ongoing process. There are a lot of parties involved, which is not uncommon when you get a street race. You've got macro parties and micro parties that are interested. It's just a time consuming process to navigate through all of those. I guess I'd say it's active.

The Fan Festival was a help," he added. I think everyone in Miami thought it was a great experience, great excitement... there were 80,000 people and almost all the comments we got were positive and exciting about it. It helped reinforce what we bring.

"Certainly the US remains priority," he insisted. "We're engaged in discussions elsewhere in the US, so it's not just Miami. But we think Miami could be a great signature event for us worldwide, not just in the US."