2021 budget cap will not have immediate impact 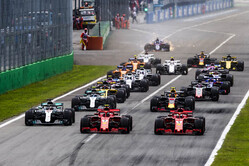 Listen to the likes of Claire Williams and Zak Brown, and one would begin to believe that all Chase Carey has to do is wave his magic wand in 2020, introduce a budget cap and equally divide the prize pot and Formula One will witness a new golden age with ten or more teams all vying for race wins and the title.

Putting aside the facts that the post-2020 plans have yet to be presented in full, far less agreed to, the fact is that it would be several seasons before the budget cap has an effect.

"Even if you introduce a cost cap in '21 it doesn't matter," admits Sauber's Fred Vasseur, "I think that they (the bigger teams) invested so much on the technical side that it will be quite impossible for us to close the gap immediately.

"But I think in this case we would have some advantages," he adds. "I think we are used to deal with this kind of budget and they are not and probably at one stage it could be an advantage. But on the first part of the deal, they will capitalise on the advantages they made."

"Why? Because the top teams can invest as much as they want during 2020 for developing the car for 2021 and once they have this big advantage it's difficult for the other teams to catch up.

"It depends now with which regulation the FIA will come up. If they really minimise the development and if standard parts are being used, then maybe the gap will be closed earlier. Otherwise it will take until '23, '24, something like this, because the real cost cap is coming in '23. The rest is just a gradient which is coming down. We will see."

"I think it's very difficult to say how long it will take to achieve this because we don't know what is happening next year to achieve that people close up to others," says Guenther Steiner. "It will be even more difficult, it is a complete new regulation, sporting, financial and technical in '21, to make a prediction on that one, so I wouldn't make a prediction on that one.

"I agree that the big three will have an advantage starting... which is just so big. Also, their infrastructure, what they've got there, their testing facilities and all that stuff is just so much more developed than what we have got so they will have an advantage but at least... I think the aim is not that we are going to overtake them in '21, that we are going to win races but that we close the gap and that everybody has a chance of ending up on the podium or at least fighting for it and keeping all the ten teams, that we put a good show on.

"That is the aim, that we don't have these two shows and we don't really know if we are racing together or not."