Awards for Bottas and Red Bull

DHL has once again presented its Fastest Lap Award for the highest number of fastest laps and Fastest Pit Stop Award to the team that consistently achieved the fastest pit stops over the course of the season.

Valtteri Bottas won the Fastest Lap Award for the season, while Red Bull received the Fastest Pit Stop Award which was only decided in the final Grand Prix of the year in Abu Dhabi.

It was the first time for Valtteri Bottas to win the award. By contrast, it has become almost routine for Mercedes, for it is the fifth time in a row that a Mercedes driver has won the DHL Fastest Lap Award.

Previously, Mercedes had been neck and neck with Red Bull, which has already won the Award four times. It was presented to Sebastian Vettel in 2009, 2012 and 2013 and to Mark Webber in 2011.

The Fastest Lap Award was established in 2007 to recognize the driver who most consistently demonstrates highest levels of speed, setting the fastest lap at the highest number of races each season. The award rewards characteristics such as excellent performance, passion, can-do attitude, reliability and precision – all of which are needed for the winning driver to be successful across the season.

New tyre compounds enabled new levels of speed with an impressive number of lap records set during the 2018 season, with best times being recorded in Spain, Monaco, France, Austria, Belgium, Singapore, Russia, the US, Mexico and Brazil.

As well as this, a very special record was achieved this year. Kimi Raikkonen set the record for the fastest lap in F1 history during qualifying for the Italian Grand Prix, achieving an average speed of 163.790 mph (263.588 km/h).

"I'm happy to receive this trophy," said Bottas. "It was quite a tough season for me personally, I was expecting more, but receiving this award brings back positive memories from this year. It also shows that I had a very decent pace in most of the races. I'll find a special place for this trophy back at home." 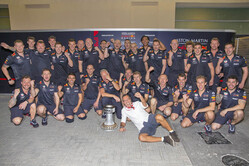 This year's Fastest Pit Stop Award provided a close competition; decided in the final race of 2018, it went to the Red Bull team. As Official Logistics Partner, DHL has been presenting this award to the team that has consistently been the best pit stop performer since 2015, rewarding perfect planning and absolute precision at breathtaking speed which are required to deliver the pit stop right first time. Pit stops are possibly the most visual evidence of why Formula 1 is a team sport.

This is the first time Red Bull has won the award, with the Mercedes team having won it last year. Sebastian Vettel and his Ferrari team achieved the fastest pit stop of the season at the Brazilian Grand Prix at Sao Paulo with a time of 1.97 seconds. Nobody managed to beat the world record of 1.92 seconds set by Felipe Massa for Williams in 2016 this season. All in all, there were 538 pit stops during the 2018 season.