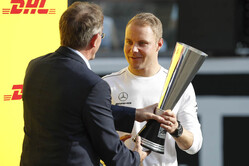 The end of season party atmosphere had clearly passed Valtteri Bottas by, the Finn very, very unhappy after a tough end to his campaign.

Like his countryman, Kimi Raikkonen, Valtteri Bottas gives little away in terms of emotions, not even the occasional bwoah!

However, in the aftermath of yesterday's Abu Dhabi Grand Prix it was clear to see that the Mercedes 'number 2' was very unhappy, almost broken.

"I think that race sums up my season pretty well," said the Finn. "Started well but then turns to shit."

Indeed, despite a strong start to the season, which saw four podiums in the first seven races, since the summer break the Finn has only made three further appearances, while his last four outings have seen him finish fifth.

Apart from anything else, surely it is no coincidence that - despite podiums in Russia and Japan - the Finn has not been the same since the infamous "wingman" instruction at Sochi.

"I initially had a lock-up into Turn 5, when Sebastian got close, and then he got DRS and overtook me," he said. "I thought it was purely my mistake - which in the end it was - but the wind suddenly turned around, so for the wind I would've had to brake a bit earlier.

"At the same time, the team could find on the rear-right brake some vibration and some issue, so sometimes the front brakes had to work harder than the rear brakes to compensate and that meant there were sudden lock-ups. THe same thing happened when I went straight and Verstappen got close. So we still need to investigate what was exactly the issue with the brakes."

Referring to the incident with Verstappen which saw the two clash, Bottas said: "It's just racing. We both wanted to gain the position. Yeah, we did touch, I was the one who lost there, as I lost the position and also I had floor damage and we had to do a pitstop also in the end. But for me it was racing."

Fact is, the Finn - seen here receiving the DHL award for most fastest laps of 2018 - looked particularly down yesterday, almost broken. After all, losing out to Verstappen, and then Ricciardo, saw the Dutchman leapfrog him in the standings, meaning he finished the season fifth.

So, from the site that predicted Red Bull partnering with Honda, and Daniel Ricciardo heading to Renault, how about this...

A 'few' races into the season, Robert Kubica says that he doesn't think he will be able to contest the full 2019 calendar. Consequently, Bottas returns to his spiritual home at Grove, while Mercedes tweets an "announce" confirming Esteban Ocon as Lewis' teammate.