Ocon to be Mercedes reserve driver 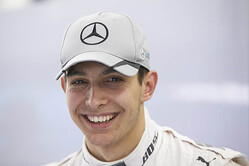 Toto Wolff has revealed that Esteban Ocon is to be Mercedes third and reserve driver in 2019.

"The plans are pretty clear," the Austrian told reporters in Abu Dhabi today. "He is going to be pretty close to the Mercedes team, he will be our reserve driver and third driver.

"We hope to do the odd test with him," he added, "we are looking at pre-season and in-season but it's not sorted out yet. He will do a lot of time in the simulator to make sure that he is ready."

The French youngster, who has lost his Racing Point seat following the purchase of the team by Lawrence Stroll, had been linked with a number of teams, but his association with Mercedes meant more doors were shut to him than open. Helmut Marko had admitted he would have Ocon at Toro Rosso in a heartbeat, but added that the Frenchman would need to sever all ties to Mercedes, a view shared by Christian Horner.

In recent weeks, there has been talk of the youngster taking on a reserve role with all three Mercedes-powered teams, but today's admission from Wolff seems to dismiss that and confirm that Ocon will focus entirely on the works outfit.

Only yesterday, while dismissing the claim that he has the "assurance" of a works Mercedes drive in 2020, he hinted that he might possibly replace Valtteri Bottas (or Lewis Hamilton should he retire) at that point.

"Definitely I will be around in the F1 paddock and trying to get as much mileage as possible in a Formula 1 car next year," he told reporters. "Me and Mercedes, we see great opportunities for me to come back in 2020 so hopefully that will be the case and hopefully I will be back even stronger than I am now."