No contrition from Verstappen 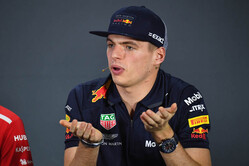 In a masterpiece of theatre, the FIA had Max Verstappen at one end of the platform at today's press conference, and Esteban Ocon at the other, the two separated by a constantly smirking pair of Ferrari drivers, Sebastian Vettel and Kimi Raikkonen, who constantly referred to the feuding pair as "boys".

Anyone expecting Verstappen and Ocon to shake hands and consign their Brazil clashes to history would have been left disappointed, for the atmosphere was palpable, the two refusing to even glance at one another.

Naturally, the media did its best to provoke the pair, and while Ocon gave the occasional smile, at the other end of the platform Verstappen was still seething, the last week or so having done little to dissipate his anger and hostility towards his rival.

Asked if, on reflection, he would have done anything differently in Brazil - a clear reference to the on track manoeuvre that kick-started it all, the Dutch youngster was adamant.

"No I wouldn't," he said. "From my point of view and how I look back at it, I had just passed Lewis for the lead.

"This season it has been a lot about tyre management," he continued. "So as soon as I got into the lead, I was just cruising to save the tyres. Somebody comes out of the pits and has fresh, supersoft tyres I think it was at the time. In general I think Force India this season have been at least a second, a second and a half behind us.

"For two laps maybe you feel like you have decent pace but the guys in the lead are most of the time not pushing flat-out to get somewhere because once you're in the lead what do you want to do? Maybe you want to try and get past and try and pull away but within two laps the peak of your tyres have gone and you end up letting us by again. That whole process to try and get past anywhere else, you're destroying your tyres in a way so I think it's always better to stay behind and follow. Clearly that was not the case."

Referring to the subsequent incident in the weighbridge garage, he said: "I was after an apology and I got a bit of a different response.

"We are all emotional and just, at the time, I'd lost the victory. So I think from my side I was really calm," he insisted. "It could have been much worse.

"I think pushing in any sport, it happens," he added. "I actually saw it a few days ago in football again, so from my side, I thought it was quite a calm response. What did you expect me to do, shake his hand like thank you very much for being second instead of first? I think it's quite a normal response.

"Okay, I got my two days with the FIA, which we'll find out what we've got to do. But from my side, because you guys don't actually hear what's being said at the scales. You just see me pushing, but if you understand the whole conversation, I think it's a bit different."

"It's not a great thing to be involved with a crash with the leader of course," said Ocon. "It's not a thing you want to see.

"I'm sorry for Max," he continued. "It was his race to win. He did a fantastic job during the whole race. On the other side, I had a slow pit stop so I came in between Lewis and Max. I got the blue flag after a couple of corners. I got away from the blue flag and was quite fast, and behind Max I was stuck. Then the team came into the radio you can un-lap yourself if you want and are faster.

"As Max said he was managing the tyres. I went for it, it was important for us to get close to the top ten pack if something happened - a penalty or anything, I could have got into the points. Things like that happen. You can't come back from what has happened. That's how it is. We have to move forward."