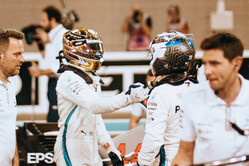 Mercedes-AMG Petronas Motorsport lock out the front row in the last qualifying session of the 2018 Formula One season. Lewis claimed his 83rd Formula One pole position - his eleventh of the 2018 season and fourth at the Yas Marina Circuit. Valtteri finished will start tomorrow's Abu Dhabi Grand Prix from P2 on the grid, completing the seventh front row lockout for the team in the 2018 season. Today's results marks the fifth consecutive front row lockout for Mercedes-AMG Petronas Motorsport in Abu Dhabi. Both drivers will start tomorrow's race on the UltraSoft tyres.

Lewis Hamilton: What a great way to end the season with a 1-2 qualifying session. I'm really proud of everyone at Mercedes, I couldn't have done this without the support and I'm really proud to be a part of the team. If you look at the team's performance on a race weekend this year - our mechanics, our engineers, our strategists - we've all raised our game and we continue to elevate ourselves as a team which is really inspiring to me; it encourages me to go out there and not let them down. The qualifying session today was great, it was a lot of fun. It went quite smoothly, the team did a really good job in getting the car into the right window. It's always difficult to improve on your last lap, particularly when your first lap in Q3 is pretty good, but I managed to increase the gap. It's still a long race tomorrow, there's a lot of work to do, but I'm really happy with today. I want to finish the season on a solid high, so that I can use that foundation to start strong next year.

Valtteri Bottas: A great performance from the team - it's impressive to see that even though we've secured the constructors' title in Brazil, everyone is still performing on a really high level, everyone's still happy to be here and really motivated. I was hoping for pole today, but I think Lewis did another exceptional qualifying and I didn't quite find enough time in Q3. I knew that there was room for improvement left after my first run in Q3 and both Lewis and I found some time, but he just managed to get a more complete lap together. However, I'm happy that I got a decent lap in Q3 and that we were able to secure a well-earned front row lockout for the team. Our pace looked good, but it is extremely close with Ferrari and Red Bull, so we'll have to wait and see what happens in the race tomorrow. There are always opportunities in the race to get ahead, so I will be waiting for my chance and hopefully come in first.

Toto Wolff: This weekend has been a special challenge: we are not here for championship points, the negative pressure is off and it's all about the enjoyment of racing. So to take the front row with Lewis and Valtteri is really special; this is a good Saturday for us. Both Lewis and Valtteri produced great laps at the end of Q3 to put some clean air between us and the Ferraris; and we have the positive of starting on the UltraSoft tyre for the first stint tomorrow as well. We know that we will need a good start, a strong first lap - and even after that, it will be a long race and very demanding on the tyres. We have managed to keep the energy levels high in the team and now we want to finish this fantastic season on another positive note. It's also been a really great day for George Russell - well done George, congratulations on a well-deserved F2 championship.

Andrew Shovlin: We'd gone into the day hoping to be able to start on the UltraSoft tyre and hoping for the front row so naturally we're delighted with the way that qualifying went. We had quite a few changes to the cars overnight and looking at our pace in the practice session today, we seemed to have moved in the right direction. We were certainly happier on the hot track than we had been on Friday. We were surprised by the pace on the UltraSoft in the second part of qualfiying. We'd thought it would be really tight to go through but as it happened, Lewis had nearly 1.3 seconds in hand so the car is clearly working nicely on that tyre and hopefully that will carry into the first stint tomorrow. The HyperSoft is a bit trickier, even though the track is quite cool in the evening sessions it is still difficult to get the tyre to last the lap without overheating in the final sector. Both drivers did good laps in the final session and it was great to see Valtteri get back onto the front row on his final run and Lewis take another brilliant pole position. We know that we've still got a lot of work to do to win tomorrow and that Red Bull and Ferrari will be doing everything they can to take it from us, but we will keep pushing until the last lap of the season and hopefully finish the year in style. I also want to say congratulations to George Russell for his F2 title - well done, George!