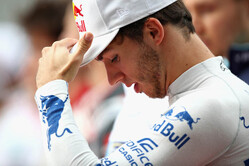 Pierre Gasly: "First of all, congratulations to Lewis for winning the Championship - another great achievement for him, and well done to Max! As for my race, it feels great to finish in the points. With the penalty, we started last on the grid in P20 so it was difficult to reach the top 10, but we managed to do it in the end; I'm really happy to get one point. It's good for everybody in the team, especially after a couple of tough races. I felt good with the car, I had some great battles and the strategy was the right one so I think we did everything we could. It wasn't an easy race; tyre management was a key factor today so you needed to be smart and push at the right time, staying focused and disciplined with your driving for the whole race to make these tyres last. We should be able start in our normal qualifying position in Brazil and Abu Dhabi, so we can fight hard and try to get our position back from Sauber."

Brendon Hartley: "I had a good start. It was a little bit of a mess going into Turn 4, a car pulled in front just before braking, I locked the brakes and flat spotted the Supersofts. Unfortunately, we had to pit on lap one and after that I effectively did a one stop race from there. I think it was a solid race with really strong tyre management. I defended heavily against Ocon, so it's a shame I got a 5-second penalty when we made some contact. Without the damage and penalty from the contact I would have been P10, and without the flat spot on lap one we had the pace to be even further up. The pace this weekend is very encouraging but the final outcome a little disappointing."

Franz Tost (Team Principal): "Firstly, congratulations to Max Verstappen for his fantastic win, Aston Martin Red Bull Racing did a really good job over the weekend showing strong performance from FP1 onwards. Also, congratulations to Lewis Hamilton and to Mercedes for winning the Drivers' Championship. Mexico is always a big challenge for the engineers because of the high altitude, which means cooling the brakes and the engine are key factors. It's also a big challenge for the engine manufacturers to find the correct parameters for the PU. We decided to race here with the pre-Russian spec PU, meaning Pierre started the race from the back of the grid. Pierre had a good start and was able to catch up with the midfield, managing the whole race well. Towards the end, he had a decent fight with Ericsson but unfortunately he wasn't able to pass him. We still scored one point, which means the car had a good potential today. Brendon had a flat spot after the start, therefore we called him in to change the tyres on lap one. He then had a really competitive race so it's a pity that he had a collision with Ocon which damaged his floor and received a questionable 5-second penalty. Due to that, he was only able to finish in P14. We lost some points to Sauber but there are still two races to go in Brazil and Abu Dhabi, so we must put all of our efforts in taking back eighth position in the Constructors' Championship."

Toyoharu Tanabe (Honda F1 Technical Director): "Pierre got a precious point today thanks to an aggressive drive that took him from last on the grid to tenth at the end. The result was partly down to his driving and partly the team's good strategy. At a track that puts the PU under a lot of strain, we had a trouble free weekend which is a positive thing."