Hamilton: I gave Verstappen "way too much space" 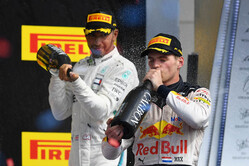 Having come out the loser in his earlier battle with Kimi Raikkonen, Lewis Hamilton decided to be a little more canny in the latter stages of the race when battling Max Verstappen for second, a move, which if successful, would have secured the title.

The Briton harried the Red Bull driver for lap after lap, getting as close as the current aero allows, Verstappen eventually making a mistake at the hairpin which let the Mercedes to draw alongside.

As the pair battled side-by-side, it was eventually Hamilton that ran wide again, this time at the double-right hander, thereby allowing Verstappen some much needed breathing space and the second step on the podium.

"Honestly I was trying to win the race," he subsequently told reporters, "but you look at the two guys next to me, they're not fighting for a championship so I had to be very, very careful how I navigated around them.

"Championships are not won by fighting and making silly mistakes," he added, "so that's really... I was trying to... as I said, I went through that corner, I gave him way too much space just to be sure that I didn't get clipped, for example, didn't get taken out because I didn't know if you would understeer into me or could be aggressive. I didn't know.

"If that was me and Seb, for example, I would have been a lot more tighter and more aggressive if we were fighting for the championship, for example," he admitted, "but there was no need.

"The key was that I at least finished ahead of Seb and for me it doesn't matter when you win the championship as long as you get it done. Ultimately we wanted to win the race today and I think going backwards two steps is not a good result but as I said, you can't win them all, you can't always get them perfect."

"I was struggling a bit more with the tyres," admitted Verstappen, "so then Lewis came close and we had a few corners where I had to close the door a little bit. Then he tried around the outside, but I was on the edge already in the fast corners so I was just sliding a lot."

Reacting to Hamilton's claim that he'd given him "too much space", Verstappen laughed: "I think you could have squeezed a bit more, yeah!"

"I never know with you," replied Hamilton. "I didn't want a coming to come together..."

"A bit of wheel-banging is... I was also thinking 'I don't know what Lewis is going to do here!'" admitted Verstappen to which Hamilton replied: "I couldn't see you!"

"It was alright," smiled Verstappen, "I was just really struggling with the tyres the last two or three laps but, yeah, made it a bit more fun!"