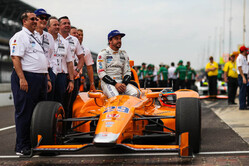 Ever since Fernando Alonso contested the 2017 Indy 500, McLaren has been linked with a full IndyCar programme, having first contested the Indy 500 in 1970 and subsequently scored a number of wins both as a works effort and also courtesy of privateers.

Increasingly linked with Andretti Autosport, for whom Alonso drove in 2017, today Zak Brown ruled out a 2019 IndyCar programme admitting the company had run out of time.

"We've taken the decision to not compete on a full-time basis in 2019," he told reporters at COTA. "We're simply not ready yet and are focused on Formula One, so we won't be doing that in 2019

"We do have the desire, as we've mentioned before, in the near future," he added.

"As far as the Indy 500 is concerned, it's something that remains of interest to us," he admitted, Fernando Alonso keen to become only the second driver to complete the so-called Triple Crown, by winning the Monaco Grand Prix, Indy 500 and Le Mans 24 Hours.

"That will be a decision that ultimately we take in the off-season and it's something Fernando would like to do. Right now we're still focused on Formula One and until we get a little bit of fresh air we'll remain focused on that."

Fact is, after another disappointing season, the Woking team is looking hard-pressed to finish sixth in the team standings, with Racing Point Force India likely to leapfrog it despite only contesting five races thus far.

If F1 is truly McLaren Racing's raison d'etre, it cannot afford distractions like IndyCar. Indeed, one gets the feeling that the decision to drop IndyCar came from higher up the McLaren 'food chain'.