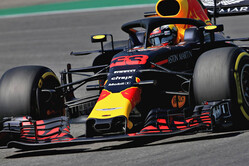 Not for the first time, despite the initial claims that forthcoming regulation changes will 'improve the racing', some aren't so sure.

The changes, which include simplifying the front wing, a wider and deeper rear wing and simplified front brake ducts that don't feature winglets, came in the light of the revelation that overtaking in 2017 was 50% down on the previous year, and a season opener in Melbourne this year that was little better.

With just four more races of this season remaining, the regulations for next year are still being fine-tuned, though Max Verstappen isn't entirely convinced they'll make a lot of difference.

"It might help a little bit, but what I'm already reading is that next year we'll have about the same downforce as this year," he says in an interview with his own website, "so I think that the benefit will be limited.

"It only looks somewhat uglier," he adds, "but maybe the design will be refined before the next season."

With the effect of DRS likely to be more apparent next year, the Red Bull driver was asked if he is a supporter or would prefer IndyCar-style push-to-pass.

"I prefer to not have DRS, which is much more natural and better for the fans," he admits, "but at some tracks you just cannot catch up, push-to-pass is an option as well, but I don't think it will be enough to replace the current DRS."

With the new regulations likely to lower lap speeds, just a couple of seasons after the rules were changed to increase them, Verstappen was asked if he prefers a lap record-breaking car or the ability to race wheel-to-wheel.

"I do not necessarily need to break lap records," he responds, "of course it's nice if a car corners very fast, but if you cannot catch one another, it's not really a nice race.

"I think you need a bit of a balance between the two," he adds. "However, it is also not nice to drive a car that has no grip at all. If I compare this year's car to the cars of 2015 and 2016 then of course, it's a thousand times better now. It was always sliding and blocking, still fast, but not a nice feeling to drive."

And asked about those concepts for post-2021 cars, as recently revealed by the FIA?

"If it is still good to drive and overtaking will improve, I can agree with it, even though the car looks very futuristic," he says. It also depends on how much downforce we lose with the new regulations."