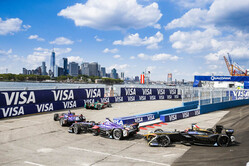 On the day that McLaren F1 driver Stoffel Vandoorne announced he was switching to Formula E, 2016 Formula One world champion, Nico Rosberg, said he can envisage the two series eventually merging.

While still involved in F1, acting as pundit for a number of broadcasters, Rosberg is a stakeholder in the all-electric series, as is Liberty Media's sister company Liberty Global.

Speaking as Formula E announced a 5-year sponsorship deal with Heineken, which also sponsors F1, the German, played down talk that in time the electric series could prove more popular than F1, suggesting that the brewer's decision to get involved with both series could be a portent for the future.

"The step for Formula One to go electric will be a big and difficult one," he added. "If that ever happens."

The new season of Formula E, which gets underway in December, will see former F1 star Felipe Massa lining up on the grid for Venturi, the Monaco-based team part-owned by actor Leonardo di Caprio, a keen supporter of environmental issues, yet, like, Rosberg, seemingly always heading back and forth across the globe in fossil-fuelled aircraft.

"It's a real problem out there in the world," warned the German, "and we need to do what we can as fast as possible to help all together.

"If the whole world is selling and driving electric cars, it doesn't make sense for Formula One to be combustion engines, so that moment will come. The advantage is that Formula One and Formula E have the same owner, John Malone."

Dismissing Brawn's claim as "nonsense", Todt said: "It is completely misleading to compare FE and F1. F1 is a well-established category and I keep saying that for me, FE is a baby of the FIA so there is still a lot to learn."

Other than the fact Brawn's claim comes at a time F1 has yet to agree on the engine rules from 2021, even more confusing was the fact that the Briton made his claim about F1 going all-electric – a move hardly likely to go down well with the existing manufacturers - via F1's own official Fan Voice portal.