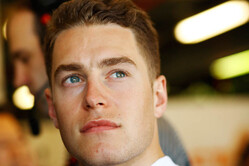 While, elsewhere in the Sochi paddock, Esteban Ocon was admitting that his only chance of a drive next season is at Williams, Stoffel Vandoorne was revealing that he has "zero percent" of an F1 seat in 2019.

Despite Zak Brown's insistence that the Belgian would make a good fit at the likes of Toro Rosso, there are clearly no takers. Though clearly talented, despite the limitations of the various McLaren packages offered to him over the last couple of seasons he has been consistently out-classed by his teammate, Fernando Alonso, who simply did the best he could under the circumstances.

Asked if he is now resigned to watching F1 from the sidelines next season, Vandoorne told reporters: "Yeah. Unless anything out-of-control happens again, then maybe, but I think chances of anything like that happening is almost zero percent.

"So the priority for me is to have a proper racing programme," he added, "and obviously in some ways stay involved within Formula 1, to still be connected to this world.

"I still feel I deserve a second chance in the good and right environment," he insisted. "The priority is first to find a race drive, which will be the main focus and target. And then we can see whatever F1 options will open up next to that."

The youngster has been linked with both IndyCar and Formula E.

"In my head it's pretty clear what I want to do," he said. "I've been in touch with a lot of teams, series for the future."

With his manager recently joining the board at Sauber, there was speculation that the Swiss team might be an option, however, while Vandoorne admits that there were talks it was never really a viable option.

"I've obviously been in touch with them," he said, "but they've been very honest with what their situation was. I kind of knew immediately where I was standing. They haven't kept me waiting, waiting, waiting and then realising it's not an option. For me it was quite clear."