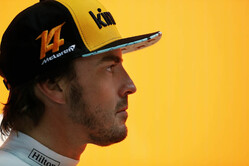 After a difficult session yesterday for Stoffel, both drivers had a smooth final practice session where they were able to complete their final tests before qualifying. Stoffel, in particular, was able to recoup some of the mileage lost in yesterday's first practice session and spend valuable time dialling in the car to the track conditions. Overnight tweaks to the set-up of both cars had been completed successfully, and Fernando and Stoffel finished in 10th and 15th positions respectively.

As night fell and track temperatures dropped, qualifying proved to be a battle for space on track in an effort to avoid traffic. With track evolution so significant, lap-times fell quickly. In Q1, on his second and final run, Stoffel was set to improve enough to pass the threshold into Q2, but kissed the wall on a self-confessed messy lap and missed out, qualifying in 18th. Fernando fared better, securing eighth position in Q1, and in Q2 pushing to get the maximum out of the car, but it wasn't meant to be. He narrowly missed out on a place in Q3 and will start from 11th position in tomorrow's race, both drivers with a free choice of tyres.

Fernando Alonso: "We have been competitive all through the weekend here and this qualifying result is good. We got back to our normal competitiveness and I'm happy about that.

"We knew that we were borderline on the Q3 cut-off, but starting the race from ninth or 10th on Hypersoft tyres can be a big disadvantage tomorrow, as those tyres seemed to have quite a lot of degradation yesterday in the long runs. So I'd rather be 11th with a free choice of tyres, and hopefully we can benefit from that. It would only be worth being in Q3 if we were fifth or sixth.

"In ten years of racing here, there has been a 100 per cent record of Safety Car periods, and we need to be ready for that in case there's an opportunity, or a window to stop and change tyres.

"It's a long and challenging race tomorrow and we need to stay focused and fight for points, but first of all we need to see the chequered flag. Reliability-wise, we haven't been too strong recently, and we need to change that."

Stoffel Vandoorne: "My last run on the new tyres was extremely messy from my side - I touched the wall about four times I think. We should definitely have been in Q2 as that was when the track was at its best. It's a shame because the pace was there to progress. I think the car is okay so that's good.

"I tried to squeeze everything out of the car. When you do a bit too much and you overheat the tyres, the lap-time doesn't come towards you. It's all about qualifying here.

"I think our race pace is usually a bit better than qualifying - we've known that since the start of the year - but around here it's very difficult to overtake, so it'll have to be about a good strategy. The key will be to see what the runners on Hypersofts can do, how long they can make them last. At least we have free tyre choice so hopefully we can gamble a little bit.

"Anything can happen here in Singapore. There's 100 per cent chance of a Safety Car so there'll probably be one at some point!"

Gil de Ferran, Sporting Director: "Today was a very positive day for us, not only because of our good starting position, but also looking at our overall pace.

"It's a shame that Stoffel wasn't able to put the perfect lap together. Fernando did an absolutely brilliant job in qualifying, delivering his usual impeccable standard and getting everything out of the car.

"Overall, we feel good about our chances to score points in the race, not just because of our grid slots, but given our free tyre choice, which for this race we feel is particularly important. Racing here under the lights on this challenging and spectacular street circuit frankly brings a high degree of unpredictability, which, at the very least, will make the race super exciting to watch."