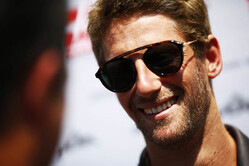 In Q2, Grosjean earned the sixth-fastest time with a lap of 1:21.239 to make the top-10 cutoff and advance to Q3. Magnussen ended up just outside the top-10 in 11th with a best lap of 1:21.669 after Fernando Alonso opted to place his McLaren alongside Magnussen into turn one and then into Magnussen's line off the corner, effectively ruining both driver's final shots at advancing into Q3.

Grosjean qualified a best-of-the-rest sixth in Q3 behind the big three teams of Scuderia Ferrari, Mercedes and Red Bull with a lap of 1:20.936. It was Grosjean's seventh straight trip to Q3, a streak that began June 23 at the French Grand Prix.

Both Grosjean and Magnussen ran exclusively on the Pirelli P Zero Red supersoft tire throughout qualifying.

Before Grosjean, Magnussen and the rest of their Formula One counterparts participated in knockout qualifying, they had one final practice (FP3) to dial in their racecars for a quick lap around the track. Both Grosjean and Magnussen began the session with an installation lap on the White medium tire before switching to the Red supersoft compound.

Romain Grosjean: "It was good. It was a bit on the limit in Q1. It didn't quite work – the margin to get through wasn't as big as we wanted, but then Q2 was pretty good. Q3 was nice, everyone improved, but I knew it was going to be super tight. I thought we'd have a bit more margin at the end. I was surprised to see the Renault so fast, and I expected the Force India to be up there. I'm very happy to be starting P6 and, of course, there's some work to be done for tomorrow, but I think we've got a good race pace, as well. There's a super tight midfield battle going on and we love it."

Kevin Magnussen: "We absolutely should've been in Q3 today. We clearly had the pace in the car. It's Monza, and everything's about slipstreaming and track position. I did my best lap in Q2 with absolutely no slipstream. I was the first car to get on track, therefore I was all by myself, and the lap I had was one hundredth of a second from getting me into Q3. So, if that was on my first attempt, I'm sure there was more in it. Unfortunately, on my last run in Q2 I was overtaken by Alonso, and I couldn't then get a lap on that second set of tires, which was crucial. It's disappointing, but we'll still have a good race and aim to score points again."

Guenther Steiner, Team Principal: "It was probably our most intense qualifying session of the year. We almost missed out to get into Q2. Just one thousandths made it happen. Then we had the incident in Q2 between Kevin and Alonso. There was a little bit of emotion from everybody because there was no need for it. It was an unnecessary situation that Kevin got dropped out by two thousandths. It was a few thousandths up and down and then he was out, but it all came good again when Romain qualified sixth and did most of it in the last sector. So, we start sixth and 11th, which is not perfect, because I think we could've been sixth and seventh. Anyway, we'll look to get as many points as we can tomorrow and close the gap to Renault."