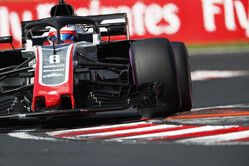 The 14th round of the 2018 FIA Formula One World Championship began with practice Friday at Autodromo Nazionale Monza as teams prepared for the Italian Grand Prix Sunday.

Two 90-minute sessions - FP1 and FP2 - on the 5.793-kilometer (3.6-mile), 11-turn circuit were run under disparate conditions, with FP1 taking place in the wet and FP2 being dry but performed under a cloudy sky.

Everyone utilized rain tires in FP1, with Haas F1 Team drivers Romain Grosjean and Kevin Magnussen making their installation laps on the Pirelli Cinturato Blue full wet tire before donning the Green intermediate tire for the rest of the session. Magnussen ended up 13th quick with a time of 1:37.066 on his 13th and last lap. Grosjean was 15th fastest with a lap of 1:37.683, also on his 13th and final tour.

Run time was further limited in FP2 after Marcus Ericsson crashed his Sauber in dramatic fashion at the end of the frontstraight just before turn one. Ericsson was able to walk away from the accident, but the damage to his racecar was extensive. The resulting red-flag stoppage lasted approximately 20 minutes as safety crews cleaned the track and repaired the Armco barrier where Ericsson made contact before launching into a series of barrel rolls.

Drivers had a little over an hour of running in FP2, where they attempted to make the most of the more representative track conditions.

The Haas F1 Team duo performed similar programs in FP2, beginning on the Pirelli P Zero Yellow soft tire before transitioning to the Red supersoft tire. Grosjean wrapped FP2 as the 11th-quickest driver with a time of 1:23.077. His fast time came on the eighth of his 31 laps on a set of softs. Magnussen ended the session 13th overall with a best time of 1:23.233 on his 15th tour, but on the supersoft tire. He completed 28 laps.

Romain Grosjean: "It's been a fairly good day. It was wet in the morning, dry in the afternoon. I was quite pleased with how the car went in the afternoon, on both low fuel and high fuel. That was good. The team did a good job setting up the car before we got here. We did a few bits and pieces adjusting the setup but, really, the car felt good. With a wet morning and the red flag in FP2 - where I was glad to see Marcus (Ericsson) walk out of the car after a big shunt - we ran our program as we could. We lost a bit of track time, but we've managed to do everything we wanted."

Kevin Magnussen: "It wasn't too bad. FP1 was obviously wet, but we still got some running in those conditions, which was good to get a feeling of that. It looks like it's going to be dry tomorrow, at least that's what the weather forecast looks like. In FP2 we got a bit of dry running to prepare for that. The car felt ok. I think there's some work to do for low-fuel running, but the high fuel looked ok. So, we've got some setup work to do, as always, and we've got to look at getting the tires to work properly, and getting the balance right in the car. It's all normal stuff, nothing spectacular. We should be ok."

Guenther Steiner: "As FP1 was rained out for the most part, we had to do some more work in FP2. We recovered very well. We got all the data we needed for tomorrow to continue in FP3, to then get ready for qualifying. So, losing FP1 was not a big deal, and it was good for us, as well, because we have very little experience on wet surfaces. To get the drivers out on intermediates and try to learn a little bit, it was quite helpful. I think we're ready for tomorrow."