Engine rules overhaul could be delayed 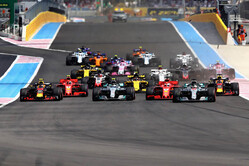 Having revealed that the first stage of the planned budget cap could be introduced as early as next year, Ross Brawn admits engine rule overhaul planned for 2021 could be delayed.

The news comes as no surprise, with the powers that be dithering over whether the MGU-H will be removed or not and no significant interest from other manufacturers entering the sport anytime soon.

While Ferrari is concerned at the introduction of more standard parts - a move seemingly favoured by Renault - Mercedes is concerned at costs, especially if in 2020 there is a need to run two different programmes side-by-side.

"We want to try and create a set of technical regulations on the engine, which are appealing to new manufacturers coming in as well as consolidate our existing engine suppliers," says the sport's technical boss, Ross Brawn.

"And I think we just need to think of our timing on that, whether 2021 is the right time to do that, or whether it's better to keep that powder dry until we can be certain that a major regulation change will bring fresh blood into the sport.

"My feeling is that there's still quite a lot we can do on the engine side in terms of sporting regulations such as limits on dyno test time, number of upgrades during a season, consistency of specification to all customer teams etc. On the engine, we need to decide if now is the time to have a revolution or an evolution," he admits.

"What I'm mostly concerned about is the capacity for a new supplier to come in," said the Briton. "We have four great manufacturers in Formula One and we don't want to lose them. But equally, we don't want a situation where the technical regulations make the challenge of a Formula One engine so great that only if you've been doing it for seven years can you hope to compete.