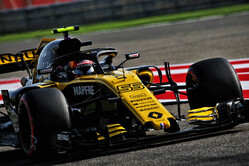 Renault Sport Formula Team endured a frustrating Formula 1 Rolex Magyar Nagydí where Carlos Sainz finished in the points, but wasn't able to fully capitalise on his fine fifth position on the grid.

As a contrast to yesterday's wet Qualifying session, the Hungaroring basked in searing sun for the Grand Prix, bringing tyre management considerations to the fore. Both Carlos and Nico Hulkenberg made strong starts, but it proved hard work moving up the order thereafter. Nico was P10 at the end of the first lap, but finished in twelfth position, pushing hard after a late stop to change to the Ultrasoft tyres. Despite the challenges of today, the team remains in fourth place in the Constructors' Championship heading into the summer break.

Nico started from P13 on new Softs, stopping on lap 23 for new Mediums then lap 50 under a Virtual Safety Car for a set of new Ultrasofts (purple).

Nico Hulkenberg: "We didn't have the pace in the car today, and the balance felt poor. Ultimately, we weren't fast enough. We had a good one last weekend and it wasn't so good this weekend, but that's racing. When you don't have the pace, everything gets difficult and I was in traffic most of the time, which makes things hard. We thought this track layout would suit us, so we need to understand what's gone on this weekend and why the car was difficult to drive. We look forward, though, testing this week before a bit of time off. The team, the engineers and the mechanics deserve the break."

Carlos Sainz: "It was a frustrating race. It was a tough first lap with the Soft, but I got off the line well until I was pushed out at turn one and lost some positions. As the race settled, I started to pick up the pace and put in some fast laps when we boxed. Traffic then didn't help and it cost us time against both McLarens, who came out in front after their first stop. We need to see what happened there but for sure we could have done things better today."

Cyril Abiteboul, Team Principal: "It was a frustrating day for us and we know we are capable of better. We had a good start from both cars, but then Carlos lost positions on the first lap and neither driver was able to make any headway thereafter. We were too conservative in terms of start tyres, strategy and the balance of the car was not good. We have two days of testing ahead of us here at the Hungaroring to work on these specific areas in addition to completing a busy program for development items for the second half of the season and directions for next year.

"Aside from today's race, we can reflect on the first half of the season as being in line with our target, but we cannot satisfy ourselves just with our championship position. We need to accelerate in every area of the team so that we not only reach our goal this year but to make sure we carry on our progression towards our long-term plan to be competing at a higher level in subsequent years."