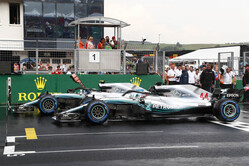 As is so often the case with F1, events away from the race track almost overshadowed the track action earlier, as it was confirmed that Force India has gone into administration.

Surely, however, it is merely coincidence that since it was confirmed earlier that Sergio Perez was behind the legal action, the Mexican finished 19th in this morning's session.

As expected, Sebastian Vettel and Ferrari led the way, however, Valtteri Bottas gave the German a run for his money, finishing just 0.059s off the pace.

However, on their qualifying sims as they pushed ever harder to close the gap to Ferrari, both Silvers Arrows driver spun, both at the chicane, and when advised of Vettel's best time, Lewis Hamilton admitted "I haven't got the grip".

With Ferrari so strong here, Mercedes really does need to up its game this afternoon, for waiting in the wings is Red Bull, the Austrian outfit aware that the Hungaroring is one of those track on which it should shine.

Should one or both of the Bull qualify ahead of Hamilton, the Briton will face a nightmare race this afternoon, for on a circuit that has never been overtaking friendly he will find it far harder to make up lost ground than he did in Germany last week.

Giving Red Bull even more impetus earlier, Renault boss Cyril Abiteboul suggested that the Red Bull team will have the benefit of an engine mode similar to that enjoyed by Mercedes and Ferrari.

The midfield fight is as gloriously manic as ever, and while Carlos Sainz was best of the rest this morning, the order seems to change with the wind, with Haas, Renault, Toro Rosso and Sauber all looking strong thus far.

To further spice things up, half-an-hour before the start of Q1, the heavens open up.

Even as the rain falls, race control confirms that there is an 80% chance of rain.

Despite the rain, such is the heat the drivers should be able to get away with slicks quite early on.

The lights go green and Leclerc leads the Mercedes duo out on to the track, with Raikkonen right behind. All are on Inters. The Bulls stay ut until everyone else has gone out, Verstappen leaving it worryingly late.

As Verstappen finally leaves his garage, Bottas posts the first time of the afternoon (27.245).

Hulkenberg goes third, ahead of Bottas, Leclerc, Ocon and Ericsson.

Hamilton complains that his tyres are overheating.

A 26.303 sees Vettel go second, the German listing the condition of the various corners, while calling on his team to have another set of Inters ready.

Sainz is first to pit, as Hamilton warns that his tyres are falling apart.

"More rain is coming soon," Vettel is told. "How soon," he replies. "Minutes," he is told.

As Ericsson pits for slicks, lightning rakes across the sky.

Vettel improves to 25.176, as attention switches to Sainz.

The Spaniard only manages a PB in S1, as does Magnussen. In S2 however he goes quickest, while Magnussen maintains his pace.

Sainz goes quickest with a 22.476, as Raikkonen switches to ultras, along with the rest.

As they all switch to ultras the thunder can be heard and the lightning seen, but no more rain.

"I think it's started to rain again," warns Raikkonen.

A 19.828 sees Raikkonen go quickest, ahead of Bottas only for Hartley to split the pair.

Verstappen goes second and Hamilton third as Sainz improves to 19.642 to go top.

Vettel improves from nineteenth to third with a 19.878.

Currently 20th, Ricciardo is on the softs.

Verstappen posts 18.673 to go second to Raikkonen, as Hulkenberg improves to fifth.

As the clock counts down, Magnussen, Leclerc, Ricciardo, Perez and Sirotkin comprise the drop zone.

The thunder and lightning continue but still no sign of the rain.

Fastest in the first two sectors, Hamilton goes quickest with a 17.419.

Alonso goes sixth with an 18.208 as Ricciardo finally finds some pace. The Australian posts PBs in all three sectors to go 13th (18.811).

Leclerc improves to 14th just as the chequered flag is waved.

"You should've told me I was running out of time," says Hamilton.

Magnussen goes 10th while Verstappen goes second, ahead of Bottas and Hamilton.