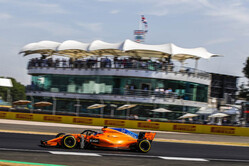 Fernando Alonso ended today's free practice for the British Grand Prix in sixth position. The Spaniard enjoyed a trouble-free pair of sessions, ending FP1 in 15th place after running through an aero test programme before posting his fastest lap-time in the afternoon.

Team-mate Stoffel Vandoorne was less happy with the balance of his car, ending both free practice sessions in 17th position, but felt that his times were not fully representative of the pace in the car.

With the decidedly un-Silverstone-like balmy weather set to continue for the remainder of the weekend, the team will be looking to maintain this positive momentum for its home race.

Fernando Alonso: "It was definitely a positive Friday for us. We tested several items for future reference, which meant we sacrificed some track time in FP1 for that. In the second session, the car behaved well and we did some tyre tests, but clearly the car is quite similar to how it was in France and Austria.

"In the last 11 days we raced three times, so the performance and the power shouldn't be too different to what we saw in the last couple of weeks, which means tomorrow it's going to be tight in the midfield. Two tenths can completely change your qualifying, as you can be out in Q1 or you can be seventh. Hopefully we are closer to Q3 than in the last few races, but everything remains to be seen tomorrow.

"The track is in good condition, in good shape; the asphalt is better, less bumpy, and has more grip. The third DRS zone probably gives us an opportunity to race as well, and the weather is great, so I think we have all the ingredients to see a good race."

Stoffel Vandoorne: "I was quite surprised to come to Silverstone and it be so bumpy, especially after the resurfacing. In general it's not been an easy Friday for us, but I think it's been pretty positive for the team.

"We split the set-ups between the two cars in FP2 and went in different directions to test various things. Fernando seemed to be going very well in sixth, so hopefully we've found some performance that we can take into tomorrow. From Friday to Saturday sometimes we make a bit of step backwards, but we'll see; hopefully we can carry on improving.

"I think it's the tarmac here that provides a bit of a peaky feeling in the car. We had a similar feeling in Barcelona and Russia when they were resurfaced, but I think it'll provide some entertainment."

Gil de Ferran, Sporting Director: "Overall, today has been a good and productive day for us, We went through quite an extensive programme of test items. Both drivers ran different set-ups in both sessions and we conducted contrasting experiments on the two cars.
"There's definitely still some room for improvement in finding the right balance on both cars for the weekend ahead. This evening it's heads down for all of us with lots of data to analyse to prepare ourselves for qualifying tomorrow."