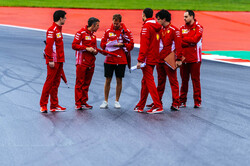 Savouring the moment, when asked about the first corner clash which saw Sebastian Vettel hit Valtteri Bottas, Max Verstappen turned things around and asked members of the media if they would now give the German the same hard time they gave him just a few races ago. "I think you should tell him to change his style," snapped the Red Bull driver.

Certain members of the media appear to have taken the Red Bull driver's advice, and today called on the German to explain his mistake in France while also referencing his error in Azerbaijan just a few weeks ago.

Refusing to rise to the bait, the Ferrari driver insisted: I'm not worried... I don't think there's something fundamentally wrong.

"I've had a lot of races, it happens unfortunately, but I try to minimise it."

Minded that the mistakes in Baku and France both occurred when he was attempting to overtake, he replied: "It's a long way and I think it's normal that some things happen along the way.

"Obviously you're also trying to push the limits," he continued. "It didn't cross my mind when I was in Baku to just stay behind, surrender and let the other person past and collect some points. That's not how I define racing. Sometimes it works out and it's great, sometimes it doesn't.

"At the end of the year, you try to get everything right and not everything wrong. That's natural. We'll see where we end up. We have a strong package, some races very strong."