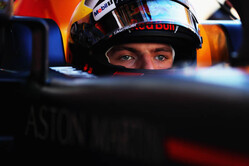 In a leap of faith not entirely dissimilar to Lewis Hamilton's controversial switch to Mercedes in 2013, Red Bull us turning its back on Renault and throwing its lot in with Honda.

Though the Japanese manufacturer has made a clear step forward this year, certainly compared to those three tortuous seasons with McLaren, the big question is whether an even greater step can be made for 2019, enough to see it winning races and titles.

While his teammate has the luxury of deciding whether he too shares Red Bull's faith, Max Verstappen is stuck with it, however, the Dutch youngster actually welcomes the move.

"No, actually not," he replied when asked if has any doubts about his team's decision. "Looking at the performance they showed this year and the improvements they made, especially in Canada, it looked very positive. They keep improving and putting people in the right places.

"I believe in the decision and the team clearly believes in it because they signed the deal," he added. "And it's exciting as well when you have Honda working for Red Bull and Toro Rosso only, and it's purely designed around your car. I think that also is very good."