Horner hopes Verstappen's luck is about to change 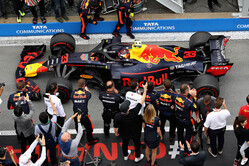 A weekend which started with Max Verstappen jokingly threatening to head-butt a journalist ended with a spot on the podium, his second of the year.

Following his crash during FP3 in Monaco which resulted in him starting from the back of the grid, it was inevitable that the numerous other incidents this year would resurface, most notably the clashes with Lewis Hamilton, Sebastian Vettel and, of course, his own teammate Daniel Ricciardo.

While all and sundry voiced their opinion, it was all too easy to forget that Max Verstappen is still just 20, yet in his fourth season of F1.

The head-butt comment was a youngster's reaction to a tabloid journalist's typically dumb and intentionally provocative question and the subsequent reporting of it - some claiming the youngster had actually made a threat - went some way to justifying itself.

However, while some might have gone into a strop or allowed the pressure to get to them, Verstappen, true to his word, kept his head down and got on with the job.

Quickest in all three practice sessions, he qualified third and went on to finish the race in the same position, posting the fastest lap - courtesy of Ms Harlow's flag mishap - in the process.

Among the first to sing the youngster's praises in the wake of a weekend which saw him - like his teammate in Monaco - find redemption, was team boss Christian Horner.

"He did a super job," said Horner, according to the official F1 site. "He's such an exciting talent.

"In any sport, you see sportsmen have periods where things don't go quite as well as others," he continued. "That's been very public for him. Hopefully his luck is about to change. This was a fantastic performance from him all weekend."

Horner revealed that Canada saw Verstappen without his usual entourage, which usually includes his father.

"His approach here has been slightly different," revealed the Briton, "he's been here on his own.

"It's the first race I think he's done on his own," he admitted. It's something different. Whether it contributed anyway is impossible to say. He is still evolving and maturing as a driver as he gains more experience. It was something that was discussed with him. It is something that will be between him and his team."

Asked if Verstappen might drop the entourage at future races, Horner said: "No, we just wanted to try it this weekend. He's been very immersed in everything the team has been doing this weekend. He has done a super job. All credit to him for putting together a very strong weekend."