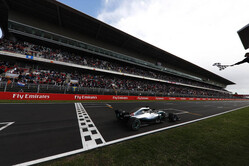 Surely it is no coincidence that weeks after Sean Bratches declared that Formula One is about celebrity, glamour and fashion, and Liberty boss Greg Maffei claimed that the sport is about selling glamour and parties, a supermodel was invited to wave the chequered flag to signal the end of the Canadian Grand Prix.

Unfortunately, as all and sundry at both FOM and the FIA have been keen to point out, the mishap which saw "supermodel" Winnie Harlow wave the flag too early was the result of a technical miscommunication and absolutely nothing whatsoever to do with the "supermodel" herself.

With the Formula One World Championship set to celebrate its 1,000th round next year in China, it's interesting that on only four occasions has the chequered flag been waved incorrectly.

Juan Manuel Fangio got it wrong in Argentina in 1978 incorrectly waving it to the wrong Lotus, while in 2002 football legend Pele waved the flag after Michael Schumacher had already crossed the line.

In 2014, in China, the flag was inadvertently waved a lap before it should have been, and then came Ms Harlow's - sorry, the FIA's - gaffe on Sunday.

So, of the 983 races that have comprised the Formula One World Championship since it began in 1950, the chequered flag process has been messed up on four occasions, a failure rate of around 0.4%.

Nonetheless, with an eye on all those other celebrities that could fall victim to the FIA's gaffes and thereby made to look slightly foolish or even uninterested in the job in hand, the sport's governing body is considering introducing an automated system.

"The chequered flag is traditional, but it's something that is prone to mistakes," said Charlie Whiting.

"We need to try and get to the situation where drivers only look at the chequered flag on the light panel," he added. "If they don't see that, then the race hasn't ended. Whether we need to go to that length to rectify a situation that happens every 10 years is arguable. But it's something that I'll certainly be looking at."

Ensuring that everyone gets the message that Ms Harlow was not to blame and that there is no reason celebrities shouldn't wave the flag at future events, Whiting insisted: "The celebrity was not to blame, I don't think that that is anything that we need to consider, certainly not at the moment, anyway.

"We may need to look at other things, like the amount of people that get up there sometimes," he admitted. "That can be a little bit difficult. It's the same at the start, you often get people up at the start, and they tend to bring friends with them, and it gets a bit busy up there."