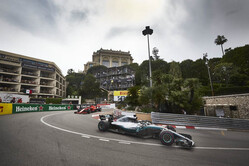 Lewis Hamilton: A big congratulations to Daniel, I'm really happy for him. He was so close to winning his first Monaco Grand Prix two years ago, so it's good for him to have it now. I'm happy with the weekend - we were the third quickest team and we almost got second. I'm grateful to only have lost three points to Sebastian in the championship fight - I'll take that and move forwards. It wasn't a really difficult race, we just had to take the tyres go a long way; I didn't think they were going to go as far as they did. It's a shame that the race is unfortunately not as exciting as the whole spectacle of Monaco, especially since through practice there's no place like it and the track is just epic in Qualifying. We hope that Canada will suit our car a little bit better; but it will be another close fight, especially with the Ferrari.

Valtteri Bottas: That's Monaco - sometimes a lot of things happen; sometimes nothing happens and you get a pretty uneventful race like today. I think we made the right choice with the SuperSoft tyre for my second stint, it felt like it was working better than the UltraSofts. The first stint was difficult because of the tyre drop-off, but the second stint was really good, I could put pressure on the cars ahead. I had more pace than the cars in front of me, and yet there was nothing I could do; even with the pace difference overtaking was impossible. We knew the weekend might be difficult and that's how it turned out to be, but we managed to do successful damage limitation. Qualifying P5 did not make that any easier for me and I don't think we could have done anything different today with the car we have. Montreal should be a better hunting ground for our car, so we hope for a better outcome in Canada.

Toto Wolff: In sport, you have to accept that there are days when you won't win and, if you'd offered us third and fifth before the weekend, we'd probably have taken it as a fair result. Congratulations to Daniel, he deserved the win and was the quickest man out there this weekend. It was a tough and frustrating afternoon for Lewis and Valtteri. Lewis suffered from graining on both tyre compounds which he had to manage through most of the race; we discussed making another stop but it would only have cost us positions, not gained any, so it was the right call to stay out. Valtteri ended up running most of the race on the best compound, the SuperSoft, but there was no way past Kimi so he had to follow him to the flag. Overall, this was a weekend of damage limitation for us and we can be pleased to leave Monaco in the lead of both championships. Now we will regroup and aim to return to winning form in Canada.

Andrew Shovlin: It was a frustrating afternoon in many ways, we finished where we started and never really had much opportunity to do any more. Our HyperSoft stints were weak on both cars, we suffered graining early on and fell back so stopped Lewis quite early for UltraSoft to avoid losing race time. Valtteri had a similar issue but we kept him out a bit longer as it wasn't really impacting his race. Our championship rivals were better at managing the HyperSoft today and we need to understand and improve before Montreal as it's likely to be even trickier there. With Valtteri we decided to try the SuperSoft tyre as Lewis was feeling that the ultra was quite delicate and needed managing. This seemed to work well in terms of pace, with Valtteri catching the cars ahead quite quickly but there was no way to pass so he had a rather frustrating afternoon following Kimi for 46 laps. Lewis was concerned that he wouldn't get his tyres to the end as they opened up early on but after some degradation they stabilised and he was able to keep pace with Vettel who seemed to have similar issues and Riccardo who was struggling with a power unit problem. Towards the end of the race, the midfield cars closed up which took away any real options to do anything under a safety car, so we just focused on bringing the cars home. Happily we've not suffered too much of a dent in our championship today and we didn't come here expecting to be the benchmark, so overall we are not too disappointed. However, whilst Montreal should suit our car more, the tyres will play a big role in the strategy there and unlikely Monaco, you can overtake. So, we'll be working hard over the next few days to make sure we understand our weaknesses. We had a tough weekend in Monaco last year and finished first and second in Montreal a few days later so we are confident that we can recover our form and will be aiming to do just that.