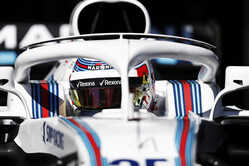 Sergey Sirotkin qualified 13th and Lance Stroll 18th for the Monaco Grand Prix. Both Sergey and Lance qualified on the hypersoft Pirelli tyre. Sergey performed strongly in Q1 to end the session in P8, making it comfortably through to Q2. Lance endured a tricky session with yellow flags and a loose head rest interrupting his running, and failed to get out of Q1. In Q2, Sergey initially struggled to repeat his Q1 pace before setting his personal best laptime after pitting for fresh tyres. He was unable to better his time of 1:12.521 and passed the chequered flag in P13.

Paddy Lowe, Chief Technical Officer: Firstly, at a circuit where its actually very difficult to get through without incident, we've got two complete cars at the end of this session. Unfortunately, it was not so good for Lance. He had an issue with his headrest in his first run and then had a yellow flag during his final attempt, so unfortunately, he was not able to get the best out of the car and qualified 18th. Meanwhile Sergey's laps in Q1 were very impressive and even gave us some hope of eventually getting into Q3. Unfortunately, that wasn't to be. Sergey performed brilliantly this afternoon and got the very best possible out of the car, but that was only good enough for 13th. Overall, I think everybody did a good job. We're a little bit disappointed because there was some promise of getting our cars a little higher than we are but still, compared to some of our recent races, our pace is looking stronger and so we will endeavour to do our very best in the race tomorrow, which is when the points are scored. Lastly, a well done to the team as this is the most difficult race to execute operationally and so far, so good.

Sergey Sirotkin: It was a good qualifying result for the team. I think we exceeded our expectations and targets throughout practice, so in these terms I'm a bit disappointed to finish behind where we have been in those sessions. At the same time, we must be realistic. We are now getting better at maximising our package and what we have earlier and quicker throughout the race weekend. We are working very well here as an engineering group. We've done a good job on both sides, here at the track and back at the factory. It's very nice to be back where we deserve to be. We're properly in the midfield, fighting those guys. We are right there. It's a good, solid starting position at a track where many things can happen. We will go for it!

Lance Stroll: That was pretty terrible. It is one to forget. I had a loose head rest on my first run, so I couldn't turn left or right for that matter, and then after that we had yellow flags, so I didn't really get a fair chance to show what I could do. Tomorrow, I have to pass people.