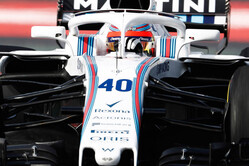 Having waited for the moment for seven long years, today's return to F1 as a driver, albeit only for FP1, should have been a glorious moment for Robert Kubica, as he took part in his first GP practice session since Abu Dhabi 2010.

However, instead of it being a moment he looks back on with pride, the Pole admits to being "embarrassed" by the car beneath him.

"It has been a difficult session for us with difficult balance," he told Sky Sports F1. "Some we were expecting but not as bad. It was a bit of a shock for me.

"I felt comfortable, although it is difficult to be comfortable in such a difficult balanced car to drive and difficult conditions," he continued. "I think I did what I was asked and I am happy with what I delivered.

"I know I'm 19th but sometimes you have to realise that there are priorities and although the conditions and car balance was very, very difficult, I managed to drive well.

"I felt embarrassed when I was driving inside the car because it was so difficult and I felt so slow in some places," he admitted. "But we couldn't do more."

"But that is a good test for me because you need to understand where is your limits and where is the limit of the car. In my position when I have to deliver feedback and cannot do silly things, I'm happy by how I reacted to those conditions.

"I was expecting to have bigger emotions," he smiled. "I had much bigger emotions in the past when I was testing for the first time or even in Abu Dhabi. Although I'm not driving often, it is becoming natural. For sure it's nice to be in an official session of a grand prix weekend but it would be nicer to continue."

Embarrassed or not, the Pole was quicker than teammate Lance Stroll in this morning's session, while in FP2, neither the Canadian or Sergey Sirotkin was able to match the time posted by the Pole earlier in the day.