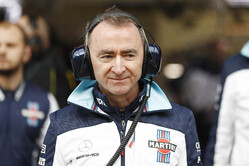 Leaving Mercedes on the back of a string of title wins, Paddy Lowe has surely experienced one of F1's true rollercoaster rides as he now finds himself at the foot of the standings with Williams and no likelihood of improvement anytime soon.

Speaking candidly to the official F1 website, Lowe admits the team is struggling, and with no quick-fix in sight.

"The car isn't good enough, it's not what it should be," he says of the FW41, the first car in which he's had input since leaving Brackley for Grove. "There are some issues with it, which fortunately we think we understand and we're very busy doing a lot of work to fix those issues.

"None of those fixes are in place now unfortunately," he admits, "which is why we were struggling so much at a circuit (Barcelona) which is an unforgiving track for underlying car performance.

"We are not writing off this season," he insists. "From the minute this car ran, it was clear there were some issues we had to deal with. We haven't yet brought anything that solves those, so we shouldn't expect it to be any better. But we will do in due course.

"You see the pace is really quite bad. This is because there is something that is really disrupting the drivers' ability to drive the car anywhere near the limit. There are many things that are good about the car and they are unable to show themselves, because the car is let down particular aspects."

To make matters worse, this weekend sees the circus move to Monaco, a track where Williams has struggled in recent years.

"We have put in place a programme with the team, which we call a recovery programme," he says, "so you bring back the car back to the level we intended to operate. That programme is timed up to the midseason point. I can't guarantee anything. We just lost our way in some critical areas, which we now understand.

All of which, combined with the loss of chief engineer Ed Wood and title sponsor Martini from next season, makes very depressing reading.