Hamilton: Respect for Vettel has grown 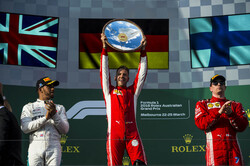 Despite trailing Sebastian Vettel in the title standings, the bromance that was 2017's early-season mutual backslapping fest came to an abrupt halt on the streets of Baku when, in a red mist moment, Sebastian Vettel barged into the side of Lewis Hamilton's Mercedes claiming the Briton had brake-tested him.

In the aftermath the Briton dubbed his German rival a "disgrace" - but not a dickhead - as he subsequently went on to win a fourth title and Vettel's season went from one calamity to another.

Returning to the 'scene of the crime', and once again trailing the German, Hamilton insists his respect for the Ferrari driver is still there, in fact he now respects him even more.

Asked what the 2017 incident told him about Vettel, Hamilton told reporters: "Not much really, it's good to see fire within the people that you're competing with, it's also good to see that they're not perfect because I guess nobody's perfect.

"We all make mistakes," he continued, "but it's more about how people handle it and how they progress, that is what you can really learn from. He's continued to progress as the champion that he is. How he presents himself, how he speaks, he continues to grow and the words that he uses today.

"The respect has grown, actually, a considerable amount since then," he admitted. "I'm sure it will continue."

Indeed, in the wake of the Bahrain Grand Prix, when a Dutch journalist attempted to make something of Hamilton's description of Max Verstappen as a "dickhead", Vettel leapt to his defence, magnanimously accepting the Red Bull driver's apology when he became the latest victim of the youngster's over-enthusiasm a week later.