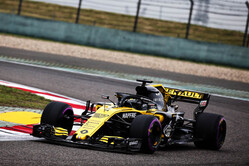 Renault Sport Formula One Team enjoyed a productive first day of the Heineken Chinese Grand Prix with both drivers completing their programmes without issue at the Shanghai International Circuit.

Nico Hulkenberg set the sixth-fastest time with a 1min 34.313secs lap, whilst Carlos Sainz was just over a tenth of a second adrift with his time the eighth quickest of the 5.5km track.

Nico Hulkenberg: "It was pretty windy in the morning session then we did see some rain at the end of the afternoon session otherwise it's been pretty straightforward. We've got a good starting point with the car here so it's a case of seeing what we can do to get the most out of qualifying tomorrow then the race on Sunday."

Carlos Sainz: "It was a clean Friday and I'm feeling more comfortable with the car. The balance is better than it was in Bahrain. We still need to look at the long-runs and make a step forward in that area but it's certainly an encouraging Friday for us. It's a lot trickier this weekend in terms of tyres and there's a big gap between the compounds and a lot of tyre degradation. We'll analyse that area and then assess the strategic options we have for Sunday."

Bob Bell, Chief Technical Officer: "It was a reasonably successful day for us with no issues. We completed our programme, despite the rain at the end of the second session, which is a positive. FP1 saw some early aero work before moving to looking at set-up then the afternoon comprised of the usual qualifying runs followed by longer stints on the tyres to get an understanding of how they should perform in the race. There were no real issues or surprises to report, so overall, it's been a productive day."