Stroll: There are a lot of things to sort out 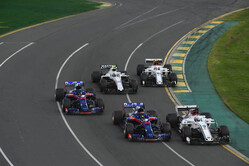 Heading into the first GP weekend of the season, while much was made of Haas' Barcelona pace - on which the American team actually delivered - the big concern was that of Force India and Williams.

With neither team making it into Q2 it was clear that the concern was well-founded. The Pink Panthers went on to finish the race in eleventh and twelfth and while this gives some cause for hope, let's not forget that but for Haas' wheelnut issues this would probably have meant thirteenth and fourteenth which is basically where the Silverstone outfit qualified.

In some ways however, of more concern was Williams performance, with Sergey Sirotkin now thought to have had his race ended by an errant sandwich bag which found its way into the FW41's rear brake duct causing "massive overheating".

No such excuses for Lance Stroll who ran a lonely 'race' to fourteenth, finishing behind rookie Charles Leclerc in the Sauber. The Canadian's best lap - like that posted by many of his rivals - came at the end of the race, albeit 2.5s off the pace of Daniel Ricciardo who had posted the fastest race lap on lap 54.

Looking ahead to Bahrain, Stroll is not exactly exuding confidence.

"We're not racing out there at the moment, we are surviving," the Canadian told reporters. "The first lap I had a mode problem, for some reason I was in the wrong mode so I had no deployment.

"I gave a position to Ocon, with a massive de-rate," he onwards we struggled with pace.

"The car wasn't cooperating the way I wanted it to the balance was all over the place. We also had temperature issues the whole race, managing temperatures. So I had to back off, I could never race the car, I was always just trying to survive, lift-and-coast, and get the car to the end of the race. That's costing us massive race time.

"On top of that I didn't have as much mode as I would usually have in this race, because of what happened on Friday with the overheating issue.

"The whole weekend we expected issues coming into the race," he admitted, "we knew there'd be a lot of problems. Realistically, it's tough to point out one issue. There are a lot of things to sort out."