Lowe: FW41 is a work in progress 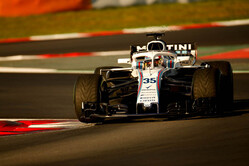 Already facing criticism from some quarters for its inexperienced and, frankly, uninspiring driver line-up, Williams came away from pre-season testing having done little to allay the fears of its fans.

On six of the eight days of testing it was an FW41 that was to be found propping up the timesheets, while only at the very last moment was rookie Sergey Sirotkin able to overhaul Robert Kubica on a harder compound tyre. Meanwhile, Lance Stroll languished at the bottom of the timesheets, 2.772s off the pace.

Though lacking pace, the Williams appeared to have reliability on its side, completing the fourth highest mileage over the eight days.

However, having lost ground to Force India in 2017, and with the midfield looking to be even more competitive this year, there are fears the Grove outfit, which has already lost title sponsor Martini for next season, could be edging towards the abyss.

However, the team's technical boss, Paddy Lowe, urges the doom mongers to bide their time, insisting that the FW41 is a work in progress.

"I think a large degree of change both in the team that delivered the car and the car itself, that can take a while to develop and optimise," he said, according to ESPN.

"I think we can make a lot more progress within the season and even into next," he continued. "It's still early in the potential I think that's in the team.

"The correlation is pretty sound," he revealed. "Actually Williams' ability to measure aerodynamic performance is one of the strongest I've seen. The technology and the people together is very strong.

"We've got a great wind tunnel, it's well up there with the best. So we've got good tools and we make good use of them but I think there's potential to do even more."

Admitting that it may be much later in the season before we see the car's full potential, Lowe admits that the priority right now is the car's handling.

"We're doing a lot of experiments on that," he said, "the limitation in the car at the moment is corner entry instability.

"That's quite often the limitation in the car to be honest but it's particularly exaggerated at the moment with what we're running and if we can unlock some progress there we will find a lot more lap time than we've got at the moment because some other aspects of the car are working really, really strongly through other phases of the corner."

If only they had access to a decent test driver... then again the next test isn't until after Spain.