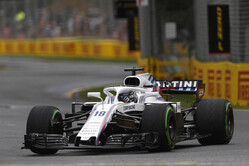 Lance Stroll qualified 14th and Sergey Sirotkin 19th for the Australian Grand Prix. Both Lance and Sergey qualified on the ultrasoft Pirelli tyre. Lance made a late improvement in Q1 to progress into the next segment of qualifying. Sergey went P13 with his first flying lap, but moved down the order as others improved. He set a personal best first and third sector on his second flying lap, but lost time in sector two, before the chequered flag fell. In Q2, Lance went P11 on his first run, but failed to improve on his second lap.

Paddy Lowe, Chief Technical Officer: Overall, it's a disappointing set of grid positions because I think actually there was more in both the drivers and the car. Both Sergey and Lance had reasonable first runs in Q1. Sergey was improving in his second run but he made a mistake in the second sector which cost him the chance to get into Q2. Lance got into Q2 and did a very good first run. He pushed it a bit harder in the second run, which should have improved quite a bit, but he made a mistake at turn three. So the grid positions could have been slightly better.

Having said that, we have got two young drivers, one of them a rookie and one only 19-years old, and I think they're both making really good progress. At the same time the car is clearly not quick enough at the moment. We haven't done laps quick enough to get into Q3 which is our goal, so there's clearly a lot more to do to develop the car in the weeks and months ahead.

Tomorrow is predicted to be dry. It will be a tough afternoon as there are a lot of difficult things to manage at this circuit. Being the first race of the season, one of the major points will be to get to the finish with both cars and that may well indeed be the best way to get points.

Lance Stroll: We would have signed up for P14 coming into the weekend after Barcelona. It was not ideal, as we could have improved on the lap in our second run in Q2. However, I got held up a little bit in the last sector and I didn't have the tyres in the window, as the fronts were cold and that kind of cost me. I felt good in the car and there was probably a little bit more in it. We are kind of in the mix for the points, depending on what happens. We will see where we end up tomorrow.

Sergey Sirotkin: There were big changes between the sessions. For sure I think we could have squeezed more out of the car, but it's the beginning of a very long season so we should just analyse a bit more, analyse what we could do better and go onwards. We need to be positive. We try to learn step by step and move forwards.