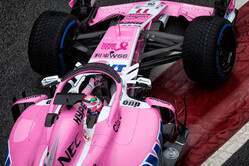 Force India's Chief Operating Officer, Otmar Szafnauer, confirms that the team will not be changing its name this season.

Amidst media speculation that a British energy drink manufacturer is on the verge of buying the team - even though the potential buyer, Rich Energy, is not as rich as it would like to be (or its name suggests) and therefore unable to make a serious bid, the Silverstone outfit has been contemplating a change of name for some time.

Last year, team co-owner Vijay Mallya - who has problems enough of his own - admitted that, if nothing else, he wanted to drop the India part from the team name as he felt it was limiting in terms of sponsorship. What with the fact that India no longer hosts a round of the world championship, Mallya felt the name was compromising his team's appeal to potential sponsors from around the globe.

Initial attempts to change the name, if only to Force, were thwarted by cyber-squatters who on hearing of the potential change immediately bought up every potential domain name available.

Now, just weeks after indicating that the change would come before Melbourne, Otmar Szafnauer has admitted that the team simply ran out of time.

"It's not going to happen this year," he told the official F1 website. "To change chassis name, from what I understand, you can't do it in the middle of the season so we'll have to get it done right at the end of the season.

"We went around to find the best name," he continued, "we had some discussion with partners, sponsors and employees. Then we went to the FIA and FOM and they said 'well, you're a bit out of time'.