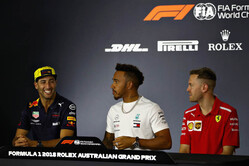 Lewis Hamilton. Lewis, I think you said over the winter that you felt that last year was the best you've driven in your Formula 1 career. Do you anticipate having to go to another level this year in competition these gentlemen?
Lewis Hamilton: I plan to. That's what I've been working towards.

Why did you feel that last year was your best? What had to come together for you?
LH: It was just a combination of things and obviously with the pressure that was on us as drivers, I think it was just the most complete year.

Thank you. A simple question for you Sebastian: can you and Ferrari find the speed to beat this guy over a whole season this year?
Sebastian Vettel: We don't have the answer now. We try. It's a long season. If it was one race it would be a different story, but it is a lot of races.

To you, Daniel: in the last few years Red Bull have not been competitive at the opening round. This year it looks like you had better winter preparation, so do you think this could be your most effective Australian Grand Prix for a while?
Daniel Ricciardo: I believe so. We had a good winter. It's all there in front of us now. I think we're still the top three teams - Merc, Ferrari and us. I think we're still going to be leading the pack for now. So hopefully we'll be deep in that group and have a chance to stand up on the podium.

(Andrew Benson - BBC Sport) Lewis, how important is it to you to carry on ahead of Sebastian in terms of stats in your career and end your career ahead of him as well?
LH: It's not something I've ever really thought about to be honest. I don't particularly have an opinion towards it. I'm just going to keep working as hard as I can to continue fighting up the front and hopefully with that comes some good results.

Here's one for you: if you won from pole it's an all-time record, you beat Michael's record. Something to aim for.
LH: Ah, OK.

(Giles Richards - The Guardian) Lewis, you say you don't chase stats but you have recognised that you could reach Fangio's record this season. Have you thought about that some more now that you are at the start of the season?
LH: I have not, honestly. It's a long, long season so you don't really think about those kind of things, you don't think about what could be in the sense of matching others. In my mind I'm trying to break down new barriers, push the envelope. Trying to see how far I can take, firstly, the opportunity I have and then obviously the ability I have and live to my full potential. I don't know what that is, and that's what I'm discovering.

(Andrew Benson - BBC Sport) Lewis, how important is it to you to carry on ahead of Sebastian in terms of stats in your career and end your career ahead of him as well?
LH: It's not something I've ever really thought about to be honest. I don't particularly have an opinion towards it. I'm just going to keep working as hard as I can live to my full potential and that's what I am discovering.

(Leon Alepidis - F1fan) A question to all of you. As Renault is already considering strategically to have a fourth engine for the year. Assuming you will all stay at that do you put your faith in your team to go on with three. Would consider down the line, in the closing stages of the championship, to go for a fourth engine in order to avoid a DNF and a penalty instead of only a penalty?
DR: It's hard to start thinking about that now. I had a few engine penalties last year and we've got one less [engine] this year so it's likely - I don't want to say it's definite - but it's obviously likely that we may encounter something like that or everyone may encounter something like that. I think it depends where you are in the championship. If you try to cut your losses I guess then maybe that's what you'll do but it's for sure too early to start thinking about that. I think we'll stay optimistic and try to get these three home to Abu Dhabi.

What about you Sebastian, have you looked at it. Is there a performance gain in using four across the season?
SV: I'm sure we looked at it. I don't think it's the plan but I'm very confident that we're not using four engines this weekend, so we don't need to worry now.

And Lewis?
LH: I don't really have much more to say.

(Dan Knutson - Auto Action and Speed Sport) Daniel, you say the team is the best prepared it's been in quite a while. Is that more pressure on you? It that more pressure, more fun, less fun? How do you look at it?
DR: It has to be more fun. Not starting last year wasn't fun at all. So it has to be more fun. Even little things. Last year we missed the anthem on the grid because I was in the garage trying to get the thing going, or be there for when it got going. I missed a lot of the Sunday build-up, which was not fun. For sure this preparation is going to mean more fun this weekend and we'll see where that fun takes us?

(Ian Gordon - The Mirror) Lewis, you said you're pushing the envelope. Do you think you've reached your peak as a driver or are you still learning?
LH: I hope not.

(Ian Gordon - The Mirror) Is it a peak age for a driver? Or do you just carry on learning?
LH: Again I hope not. I'm sure there is a peak when for a driver when their fitness level.... When it gets harder to reach the fitness level that we do today. When your interest starts to decline, when your drive starts to decline, I guess that's when you're over your peak. But I definitely don't feel I'm that. I'm definitely in a good range now and that's where I need to continue, to extract the most from it.

How about you two? Daniel, are you peaking?
DR: Not yet, still young.

Seb?
SV: I don't know. I think it's fine. Lewis is a little bit older and he's not peaking yet, so I have got plenty to look forward to.

(Andreas Haupt - Auto Motor und Sport) What is your opinion about the additional DRS zone and is it helpful or not?
DR: I don't think it hurts. It's typically been a pretty hard track to overtake. I think, as well, with the cars, we're going faster and faster and following a car is getting harder and harder at some circuits, so I think they've been proactive and tried to help out a cause here. I don't know if it will necessarily create overtaking into that corner but it may at least put you into the zone to then have a chance somewhere else.

(Louis Dekker - NOS) Do you think the next world champion is sitting behind the table now, or standing outside speaking Dutch?
DR: Why are you looking at me?

LH: I don't have answer for you. [Sebastian] do you have a better answer?

SV: I think we hope the one sits here. I think it's obvious no?

Let's put it this way, do you think the one outside speaking Dutch is ready to challenge for a world championship?
SV: Who do you mean?

LH: There are a lot of Dutch people here.

SV: Especially for TV and journalists.

Dan?
DR: We'll add a ninth to this table?

SV: What?
DR: We'll add a ninth to this table. We've got eight between us.

(Phil Duncan - PA) Lewis, one of your former team-mates this week said that inconsistency was your biggest weakness. I'm just wondering whether you think that's the case. And Seb, what's your plan to beat Lewis. Have you thought over the winter about the best way to do that?
LH: I think I proved that's not the case last year and... yeah... again, I think there's a lot of people that need to get headlines, and so maybe that's one way of saying it. No, the goal this year is to be even more consistent that I was last year. I think consistency was the reason that I won the Championship last year.

(Jonathan McEvoy - Daily Mail) Sebastian, do you see any weaknesses in Lewis? How would you describe them, or see them? What are they? If there are any.
SV: Well, there aren't many, so I think he's doing a very, very good job for many years now. So, I think it's always a bit of a weird question to answer when the person is sitting right next to you. But, as I said, there aren't many. I'm sure we all have our weaknesses. Maybe some are part of our characters, maybe some are part of our driving - but to be honest I don't think about those too much. I think about mine quite a lot and try to get better at what I need to improve. But yeah, concerning other people, it's not in my hands. So, I try to finish my plate.

LH: I think I share the same weakness with everyone in this room. Everyone loves pancakes. That's really my only weakness.

(Ben Hunt - The Sun) Lewis, are you up for it this year? You seem a little bit jaded here - I don't know if it's jetlag or whatnot - but are you up for the fight this year?
LH: I'm definitely not tired - this is the 12th season of doing the press conference. I'm not the most excited about this section of the season and the race weekend - but I'm looking forward to getting in the car.

Are you up for the fight?
LH: Of course.