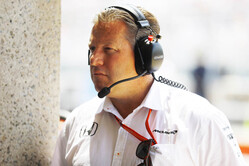 2018 is either likely to see McLaren take a significant step forward or leave the multi-champions with egg all over its face.

While Honda attempts to revive its fortunes with Toro Rosso, and possibly Red Bull, for the second time in its F1 life McLaren is turning to a French engine manufacturer.

At a time Red Bull is seeking an alternative to the French manufacturer, unhappy with the reliability issues that plagued both drivers last year, though Zak Brown admits similar concerns he is adamant the new partnership will take McLaren further up the grid.

"They've got the power," he said at an exhibition in Birmingham. "Though they've got some reliability issues when they turn the power up.

"Mexico was a setting issue," he continued, "but Max did win the race in pretty dominant fashion," he added, referring to Red Bull's Max Verstappen, "so they've got a fast engine.

"I actually think the top three are pretty close," he insisted, "and have all won races last year, so there's clearly not that big of a deficit between them.

"We have some areas we can improve, we're not perfect," he admitted, "but the lack of power was the single biggest area of weakness, so I think when we get the Renault in the back we should see a substantial difference in Australia.

"We're happy with our working relationship with Renault, and we should hopefully get back to where people are used to seeing McLaren at the front of the field."

Asked about Honda, Brown admitted that the Japanese manufacturer's insular approach was an issue, comparing it to that which proved so problematic for Jaguar when it entered F1 in 2000 having bought Stewart Grand Prix.

"Eric spoke earlier in the year about how there's a certain way you have to operate in Formula 1, a Formula 1 culture, and I think that's something they now recognise," said Brown. "You kind of saw the same thing with Jaguar, when they came in. They kind of did it the corporate way.

"If you look at Mercedes, they're not based in Germany, the race team's in England, the engine facility is in England; Renault is split between England and France.