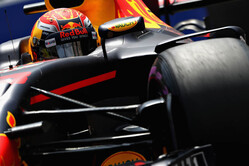 Max Verstappen: "Another front row qualification so I am pretty satisfied with today's result. Q2 was really good but somehow we lost a bit in Q3 with the tyres, I couldn't get them to work and struggled for grip. I would say the Q3 lap was better but I just didn't have the grip from the previous session. The plan was to abort the first lap in both sessions and use that as a build lap. At the end of the day we are still second and on the front row so no big issue. It is always nice to get a pole position but winning the race is more important. I am confident in the race pace of the car and that we can achieve a good result but we still have to show this tomorrow. Starting on the front row with such a long run into Turn 1 means we can hopefully get away well and ahead. We are usually quicker in the race than Qualifying so I am excited for tomorrow."

Daniel Ricciardo: "We have been strong all weekend but in Qualifying we just didn't have any grip. I topped the times in FP2 and Max did the same this morning so we didn't really touch the car from yesterday, but every time I left the pits today I just had no grip. We tried experimenting in Q3 and doing an extra warm-up lap to try and give the tyres something extra, but it seemed that the grip I had when I left the box, was the grip I had until the end of each run. Sometimes you get one set of tyres that you can't turn on or warm up properly and you might lose some time, but every run it seemed to be the same story. This morning the track was really cold and we were still able to post a time on the first lap, so it should have been a breeze to get the tyres up to temperature this afternoon. If we can get the car back to what we had before Qualifying then I think we can still fight for a podium tomorrow, but this is confusing and we really need to understand what happened in the last hour."

Christian Horner, Team Principal: "A really exciting Qualifying in the last session with different options taken in preparing for the timed laps. Max did a build lap on his first run and produced a fantastic lap time. Unfortunately he wasn't able to improve on it on the second run, and Sebastian just snuck ahead by eight hundredths of a second, nonetheless starting the Mexican Grand Prix on the front row of the grid is a good place to be. Daniel struggled in the low-speed corners comparatively so we need to have a look at that, but we know he's a great overtaker and he'll be fighting hard tomorrow."

Check out our Saturday gallery from Mexico, here.