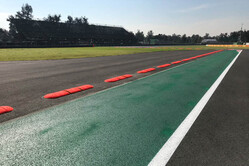 A number of changes have been made at the Autodromo Hermanos Rodriguez ahead of this year's race.

The wall straight on at turn 4 has been moved back some 20 metres and speed bumps have been placed after the apex kerbs on turns 8 and 11 in order to ensure drivers re-join the track off line. These are also painted bright orange.

All of the exit kerbs have now been ground at the back edge in order to ensure there is a 150mm chamfer present, while additional TecPro barriers have been installed in parts of the barriers at turns 1, 7, 10, 12 and 16.

Tyre compounds this year are soft, supersoft and ultrasoft, a step softer than 2016, this being the first time the ultrasoft has appeared at the Autodromo Hermanos Rodriguez.

Last year's race was won by Lewis Hamilton who ran a one-stop strategy, starting on the softs before switching to a new set of mediums.