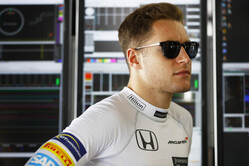 Before a wheel has even turned at Austin, Stoffel Vandoorne gets grid penalty after engine change.

Having suffered a (35 place) grid penalty at its home race which saw Fernando Alonso demoted to the back of the grid after Honda elected to change the Spaniard's entire power unit, Stoffel Vandoorne's Austin weekend doesn't appear to be fairing any better.

The Belgian is to be hit with a 5-place penalty after Honda opted to change the Internal Combustion Engine (ICE) on his car ahead of the weekend.

It is the youngster's 8th ICE of the season, bringing him level with teammate Alonso.

In a bid to minimise the penalty, Honda has elected not to change any of the other components, though that may change over the course of the weekend.

Alonso, who today's agreed a new "long term" contract with McLaren, which has dumped Honda in favour of Renault next season, will use the same engine he used at Suzuka.