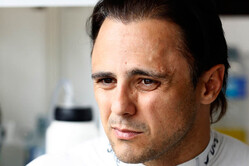 If anyone knows the meaning of 'never say never' or 'it aint over until the fat lady sings', it is Felipe Massa.

At last year's Brazilian Grand Prix the Williams veteran - taking full advantage of a red flag period - wept openly as he celebrated the end of his long career with his countrymen during a break in the race.

A few months later, following Valtteri Bottas's defection to Mercedes to replace Nico Rosberg, the Brazilian veteran was lining up on the grid in Melbourne.

A few weeks ahead of his home race, and another possible retirement celebration with the fans and no doubt more tears, Massa was asked about the proposed shoot-out between Robert Kubica and Paul di Resta for his seat.

Following his initial shrug, when asked if he would attend the shoot-out (no, us neither), the Brazilian gave a firm no, before adding: "I don't know even if it's true… the test, or not.

"But even if you do a test with a car which is four years before, it's completely different," he added, "you cannot evaluate too much as well, so it doesn't change anything for me.

"Williams know one hundred percent what I can give for the team," he said. "I think I can give a lot to the team like I did already. I think maybe I can do another year but I don't decide, the team decides.

"I'm pretty relaxed," he insisted. "Trying to enjoy the races, trying to give the best to the team and that's the most important thing. I'm talking with the team, definitely, for next year, and we are in discussions."

Asked if he had set a deadline, he said: "No, we don't have a deadline. But definitely I think it will be good for the team, and also for myself, if we know what is going to happen before the race in Brazil.

"We'll see if that is possible, but we hope so."