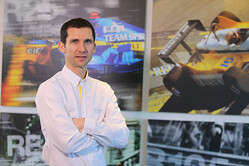 Cyril Abiteboul, Renault Sport Racing Managing Director: The Austrian Grand Prix comes at a critical point of our season and it's important that we go there in determined fashion. We need to be resolute to put aside the disappointment of Baku, be in a position to strive for a points haul in Spielberg and eager to meet our targets for the season by getting back on the right track.

Azerbaijan left us with a bittersweet feeling. Results and reliability were disappointing, even more so it doesn't correlate with the amount of work accomplished from the engine perspective, although Daniel Ricciardo's win does show the progress. For Renault Sport Formula One Team, there is frustration since Montreal. We feel the car is much more competitive and that was experienced right from the start of the weekend in Baku. Unfortunately this didn't translate into points.

In Baku Nico did a fine job in the race, staying out of trouble before and after the red flag, but the slightest of misjudgements put an end to his charge. Jolyon, meanwhile, was up against it after missing out on qualifying and had to retire seven laps in. The team in Baku did a great job on both cars, especially Jolyon's, by giving him a chance to be in the race, but ultimately we fell short.

Looking to Austria, we are confident. We will start to see further improvements on the car and we aim to make a fresh and positive turnaround in Spielberg. We are fully committed to ensuring we get to the right milestones and to catch-up on lost points from Baku.

Austria and Silverstone are the first European back to back races of the season. They are exciting circuits with passionate and energetic supporters to match. The fans witnessed a great show in Baku and we hope it will be the same in Spielberg and that Renault Sport Formula One Team gets back in the points.

It's important now that we add to this success. Our season goals are unchanged. We want to be sixth by the mid-season break and fifth come Abu Dhabi in November. Therefore, it is vital we pick ourselves up and push on for some points in Austria from both cars. It is about regrouping, working hard together, concentrating, putting our issues behind and ensuring we stay positive both in the build-up and during the race weekend.

After a weekend of highs and lows in Baku, Engine Technical Director Remi Taffin looks at the state of play in the Power Unit world.

What can we expect from the Red Bull Ring?
Remi Taffin, Engine Technical Director: It is quite a power sensitive track and it probably will be in line with Baku in terms of performance expectations. We will consolidate the power improvement made for Baku and aim to deliver more. There is no big plan with brand new upgrades, just continual improvement of the entire package. The altitude of the track will be a challenge as the turbo will spin faster to generate the required induction, so that's something we'll monitor. Experiencing a trouble-free weekend will bring points.

What's the post Baku debrief?
RT: In terms of performance we were able to demonstrate on a very power-sensitive circuit that we have made another step forward. This was not through new components, but rather through our continual quest for more power and improvement, concentrating on the details and optimising every element of the package. Nico was fighting to be in the top five when he made contact with the wall, and this was on a circuit with a tremendously long straight and a great appetite for horsepower. It was also good for us to be able to cheer the race winner.

What is also clear is that we did have reliability issues on track; issues which we immediately addressed, but this should not detract from the clear progress which has been made. We have put in place new and better procedures to catch any issues before the cars take to the track and we're working with great diligence in this area.

For our customer teams, we saw coincidence of issues. The Energy Store issue we have seen has been addressed and the new Energy Stores are to a different specification without this concern. With the ICE, the latest specification addresses the problems we've seen to date. In Austria, we have the latest versions of components and we should not see any repeats of previous woes.