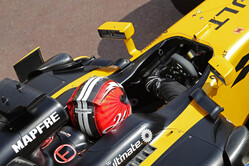 Nico Hulkenberg: "A pretty standard Friday for me except for not getting a fast run on the softest tyres during FP2. It was pretty slippery in FP1, but the track had improved for the evening session. We made some decent progress through the day and I would have been quicker if I'd had a shot at a fast lap on the Supersoft tyres. As always, there are improvements we can make for tomorrow, so that's where our focus lies."

Jolyon Palmer: "It was pretty slippery out there and we struggled to get grip from the tyres. The car was feeling better in FP2 but I was caught out at turn eight which ended my day early. We had made progress between FP1 and FP2 and there's more we can make for tomorrow. Thankfully there's not too much damage to the car, so we'll look to get it where we want it to be for qualifying."

Bob Bell, Chief Technical Officer: "The first session went reasonably smoothly, but the evening session was dominated by a number of yellow flag incidents which affected our run programme. Jolyon had an early bath, however we did get a long run with Nico in the car so there's sufficient data for race strategy decisions and Jolyon's car won't require too much work, so no big dramas."