Permane: Kubica has the pace for F1 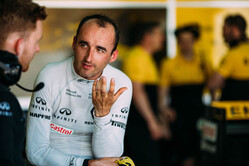 Though quick to officially play down the significance of last week's test at Valencia, insisting it was a "one-off", the talk in Canada at the weekend - ironically, scene of Robert Kubica's sole Grand Prix win - was the fact that the pole completed 155 laps.

While some have dismissed the idea of Kubica making a shock return to the sport as a fairy-tale, others are not so sure believing the Pole still has much to offer.

Speaking to Poland's Eleven Sports, trackside operations director Alan Permane, who oversaw the test, admits it was the mileage Kubica completed that really impressed, dispelling the notion that the former BMW and Renault driver might struggle over the course of a GP weekend.

"I had no doubt on his pace, ever, at all," said Permane. "I did not know, I don't think he knew, whether he would be able to drive physically... and, more than that, be able to drive a lot.

Asked if he thought Kubica could make a successful return to the sport, the Briton replied: "From what I've seen from the statistics, from the data, the pace is there. That's for sure."

However, with a word of caution, he added: "On that Tuesday in Valencia he did a fantastic job. However, there are many other circuits, and whether he has physical limitations on those, only he knows at the moment. If it needs to go any further, that would be the next step."

Asked about the secrecy surrounding the test, Permane explained: "We did not want to create a big media storm. We knew, once it got out, everyone would be interested. Everybody loves Robert, everybody feels very sad for what happened.

"He was very calm about it," he continued. "He had no problem with telling people.

"I didn't want to put a lot of pressure on him," he admitted. "I just wanted it to be a day for him, without any expectation, any pressure, just for him to drive."

Asked if Renault might give the Pole further tests, Permane admitted: "I think it's too early to comment.

"We've been in touch," he continued, "we've been talking about anything possible we might do in the future. But at the moment there is nothing else planned, I can say that much at the moment. But I wouldn't say we won't do something again in the future.

"I know he's driven some simulators," he added, "maybe that is something we will be thinking about for the future. That might be the next step, is to go into the (Enstone) simulator."

Speaking at the weekend, Kubica made clear that a "proper comeback" is his dream.

"I don't know what it will bring," he told Sky Sports of the Valencia test, "but definitely it's a nice feeling to know I can drive an F1 car after such a difficult period and having my limitations.

"I would like to test more," he admitted. "It doesn't depend only on my side, but I will keep working and hopefully one day I will have a chance to go forward and step-by-step maybe have a proper comeback."