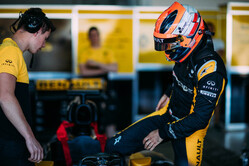 Buoyed by his private test with Renault this week, Robert Kubica is targeting a "proper comeback".

A horrific accident in a minor rally in Italy in February 2011 possibly robbed Formula One of its first Polish world champion.

Already a proven race-winner, Robert Kubica had posted the fastest time in the opening pre-season test.

Ever the racer, in the same tradition of some of the sport's greatest names during the break between the tests he sought to further develop his skills, opting to drive a Skoda in the Ronde di Andora rally.

The freak accident which saw him almost lose his arm didn't end his racing career however. Though F1 appeared out of the question he returned to rallying, winning the 2013 WRC2 series.

However, he never lost sight of F1, and this week's test, which followed preparatory work in GP3, Formula E and LMP2 cars, demonstrated that, certainly in his mind, the dream is not over.

Though Renault described the test, which saw the Pole complete 115 laps, as a one-off, Kubica insists that it has only further whetted his appetite.

"For sure it's kind of a new start for me," he told Sky Sports. "I don't know what it will bring, but definitely it's a nice feeling to know I can drive an F1 car after such a difficult period and having my limitations.

"I would like to test more," he admitted. "It doesn't depend only on my side, but I will keep working and hopefully one day I will have a chance to go forward and step-by-step maybe have a proper comeback."